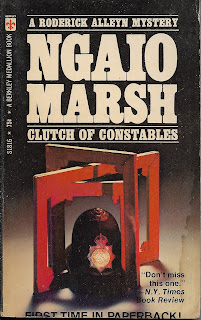 Clutch of Constables (1968) by Ngaio Marsh

Troy Alleyn, wife of Inspector Roderick Alleyn of Scotland Yard, decides to take a small break after a big art show in London. She sees an advertisement for a last-minute opening on a five-day cruise along an English river aboard the M. V. Zodiac. She hopes to relax and enjoy the slow-paced journey.

Meanwhile, Alleyn is in the United States on the track of an international criminal who goes by the nickname "Jampot." A criminal with several murders to his credit along with a trade in narcotics and art forgeries. No one knows exactly who he is or what he looks like and he's known to be a meticulous planner and superb mimic with something unusual in his physical appearance. There are hints of Jampot-like activity in the U. S. But when it's discovered that the passenger who "cancelled" his Zodiac reservation at the last minute has been murdered in a way that bears all the hallmarks of Jampot, it looks like Alleyn is searching on the wrong side of the Atlantic.

Could Jampot be one of Troy's fellow passengers? There is a graphics expert with a clubfoot, a most inquisitive cleric with only one eye, a "swivel-eyed*" butterfly enthusiast, and an Ethiopian doctor with an interest in skin dyeing. Of course, the rumors of an unusual physical appearance may have been intentionally circulated to mislead...When a second passenger dies and there is reason to believe she has met her fate at the hands of the international criminal as well, Alleyn becomes concerned about Troy's safety and heads back to England post-haste. He arrives in time to save her, but not soon enough to prevent one final death...

For the most part, this story is told from the point of view of Agatha Troy Alleyn--which makes it unusual an unusual entry in the Marsh mysteries. Framing this main narrative are take-way shots to Alleyn giving a police lecture (about a year later) on Jampot's criminal activities and eventual capture. On the plus side: I enjoyed the difference in telling the story from Troy's point of view. Those sections of the book where we were on the boat and following her adventures were delightful. Marsh does a good job reflecting Troy's "artist's eye" for detail in those portions of the book. What doesn't work so well: the framing of the story with Alleyn's lectures on the investigation. The insertion of these scenes were jarring and took me completely out of the story. It was also evident that Alleyn wanted to kick Carmichael's bottom (the listener in the second row) and I wish he had done and gotten it over with. That running theme was also incredibly distracting and, frankly, unnecessary.

The plot, once we swallow the incredible coincidence of the wife of the celebrated Inspector Alleyn sharing a river voyage with a criminal mastermind, is interesting enough, though I'm not quite sold on why we had to take a river cruise to try out our art forgery stunts (and there's another lovely coincidence--not only do we have the wife of an inspector aboard--but we have the famous artist Troy along on cruise where art forgery will figure heavily!). Perhaps it's because I've read this before (though it's been about 35 years or so and I really didn't feel like "oh yeah, I remember--that's who did it..."), but I spotted the villain immediately and absolutely knew that his next victim was about to be knocked off. It didn't spoil my enjoyment of the river trip account, so I can put this down as a nice, solid  read. ★★★

*as far as I can tell, swivel-eyed in this time period meant something like squint-eyed

First line: "There was nothing fancy about the Jampot," Alleyn said.

Last line: A single-berth cabin is available for this day's sailing. Apply within.