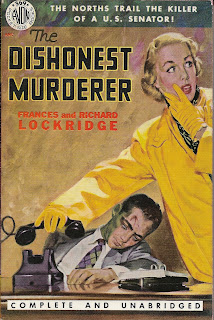 It's New Year's Eve and Freddie (Winifred) Haven is ready to celebrate...not just a new year, but a new beginning. The party is being held in honor of her engagement to Senator Bruce Kirkhill. But things begin to go wrong before the midnight revelry begins. As they are making final preparations for the party, her father, Admiral Sattrbee, is acting a bit odd, haltingly asking whether she's sure about this engagement, and then she accidentally overhears part of his telephone conversation with an unknown man. A conversation that seems to be about her fiancé. Then Bruce doesn't turn up at "ten-ish" as expected--nor at eleven-ish or midnight. When the party is winding down, a policeman arrives with the news that man, whom they hope very much isn't the senator (but by implication they very much believe is...), has been found dead in very unfortunate circumstances. And could someone come and verify whether the man is Kirkhill or not? It is.

Now, of course, this is a Pam & Jerry North story--so where do they come in? Well, as it happens, Admiral Satterbee is preparing to publish his memoirs and has naturally decided to do so with North Books. Pam & Jerry were invited to the New Year's party and stopped in for a while. Pam's radar went off and she knew that Freddie was worried about something and, being Pam, had been especially nice to the young woman even though she and Jerry had to rush off to another party. Bill Weigand (who seems to catch all the calls for murder in New York City) is on the case. And when a rather disreputable little man shows up at the Satterbee apartment to see her father, Freddie gets even more worried and hares off to the Norths apartment to ask Pam's advice...because somebody had once mentioned to her that "those Norths are amateur detectives...or something."

Senator Kirkhill was found in a seedy section of town, wearing worn and scruffy clothes. He had died from chloral hydrate. One might think that he'd run into trouble of some sort down in the Bowery, but Weigand and company focus on the senator's associates, friends, and family-to-be--because everyone seems to be hiding something and one of them just might be hiding the guilty knowledge of murder. He also happens by the Norths' apartment while Freddie is there and wonders why she's so frightened. Not that she'll admit it him. But Weigand will find out in the end...and he'll get his killer too.

Another light and breezy adventure with the Norths. My memory of this one must be better--or I was just very astute today--because I spotted the culprit right away (as I recall, I spotted them right off the first time I read it, many moons ago). But this didn't prevent me from enjoying myself thoroughly. I love reading the Lockridge books when I need a light, comfortable story. And, I had forgotten the slight twist at the end--where Freddie Haven gives Pamela North a run for her money on figuring out what the culprit is doing while they're doing it. Great fun! ★★★★

First line: There is nothing to worry about, Freddie Haven told herself.

Last line: Because usually it isn't, Pam North told herself, rounding off her thought, as she always liked to do.