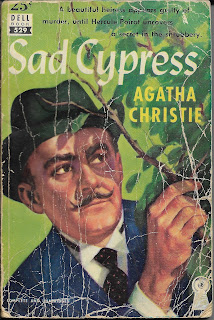 The story opens in court. Elinor Carlisle is on trial for her life--accused of poisoning one Mary Gerrard with morphine in fish past sandwiches. (Fish paste sounds rather poisonous to me all by itself....) From this opening scene at the trial, we switch gears to the backstory. We see Elinor and her "cousin" Rodney (her aunt's husband's nephew) discussing an anonymous letter just received by Elinor. It warns her that "someone" is worming their way into her Aunt Laura's affections and might do her and Rodney out of their expected inheritance. The only person this note could refer to is Mary Gerrard, the daughter of the lodgekeeper on Laura Wellman's estate. Mary has made herself useful around the house and kept Aunt Laura company in the woman's recent illness. Aunt Laura has become fond of the girl and given her educational advantages above her station. She also speaks of making sure the girl has a chance to set herself up in a respectable profession.

Elinor and Rodney have planned to marry and they've always expected to live well--eventually--because Aunt Laura has always given them to understand that they would benefit under her will. They aren't anxious for Aunt Laura's will to be enforced, but they do want to be sure of their standing. So they make a trip to Hunterbury Hall to see what's what. While there, Aunt Laura suffers a second stroke (the first being the cause of her illness) and tries to communicate that she wants her lawyer. Elinor and Dr. Peter Lord (Aunt Laura's doctor) assure her that they'll have the lawyer in as soon as possible in the morning, but Aunt Laura doesn't make it through the night. Elinor and Rodney are shocked to find that Aunt Laura never made a will at all...leaving Elinor, as the nearest blood relation, as the sole heir.

Other matters are afoot, however. When Rodney sees Mary Gerrard for the first time after many years, he is struck all of a heap and falls head over heels in love. Mary won't stand still for him to address his affections to her--after all he's supposed to be engaged to Miss Elinor! Elinor sees how things are and breaks off the engagement, but she also arranges to fulfill her aunt's intentions and settles money upon Mary. And then...while clearing up her aunt's things and preparing to sell the house, Elinor, Nurse Hopkins (on duty during her aunt's illness and still hanging about), and Mary share a picnic meal of fish paste sandwiches and tea and Mary dies. Bringing us back where we started...

Peter Lord has done his share of being struck all of heap and has fallen for Elinor. He's determined to see her walk free from court and asks Hercule Poirot to investigate. Poirot doesn't, at first, see much room for investigation. The case seems to be pretty clear and there doesn't seem to be anyone else with a hint of a motive. But as the detective begins interviewing people and they start telling him lies, he begins to see possibilities. He digs up evidence and is ready to provide dramatic witnesses in the final days of court...but just which way will the finger of guilt point?

It's been a very long time since I read this one. In fact, I'm pretty sure this is only the second time since I first discovered Christie about forty years ago. This time around, I was getting Strong Poison vibes with the courtroom bits. We open with the courtroom scene and Elinor Carlisle on trial for her life. A man named Peter is in love with her, desperate to see her cleared, and wants to dig up evidence to save his lady. Of course, Dr. Peter Lord is no Lord Peter Wimsey and doesn't have amateur detective stamped all over him, so he does the next best thing to solving the mystery himself, he convinces Hercule Poirot to investigate.

A slightly convoluted plot, but Christie is very good about planting the clues right there in front of you and then distracting you from them. And I thought she did a very good job with the characterization in this one. Very nice sketches of every important character and we get a good sense of who they are and how they behave. ★★★ and 1/2.

First lines: "Elinor Katharine Carlisle. You stand charged upon this indictment with the murder of Mary Gerrard up the 27th of July last. Are you guilty or not guilty?"

Last line: With you, she can be happy.

I love her style! Must add that one to my collection!📘