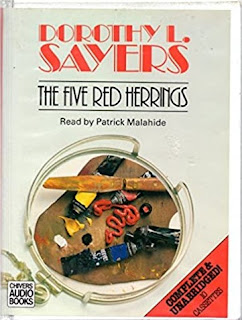 I'm still treating myself to audio presentations of the Lord Peter Wimsey.  Though I am admittedly partial to Ian Carmichael as Wimsey, I have been venturing out (where possible through the library, Youtube, etc) to sample other interpretations of my favorite amateur sleuth. This particular story features a trip to Scotland with Lord Peter and Bunter for a fishing holiday. Of course, it turns into a busman's holiday when Lord Peter gets involved with a corpse amongst the artist's community that he's landed in. For my full review of the story, please see the link above. This review will focus primarily on Patrick Malahide's reading/performance of the book.

First off, let me say that it was highly enjoyable to hear the actor who portrayed Ngaio Marsh's Inspector Roderick Alleyn give us his version of Sayers' characters. His Wimsey is Alleyn with a much lighter touch and a more obvious sense of humor. The tones are similar; after all, the two gentlemen both come from the gentry class--Wimsey as the younger son in a ducal family and Alleyn as the younger brother of a baronet--and both are Oxford graduates. His Bunter is a bit off--Wimsey and Bunter have served in the first world war together and there is a close relationship underneath the very proper lord and master routine. I think Malahide's portrayal misses that flavor. Of course, I have been spoiled by Glyn Houston's portrayal in the BBC's 1970s series. For the most part, Houston (in my mind) captured the sense of the relationship which I gathered from the novels. But Malahide does a superb job with the Scottish accents--and especially with differentiating the various characters.

As I mention in my linked review to the novel, one of the most tedious bits of this story is the very long and labored rehashing of the clues and motives and each official from the lowest constable to the Chief Constable, Sir Maxwell, backing their favorite suspect (or suspect combo, as the case may be) and explaining how each of the clues work into their version of events. It is really quite tedious and it wasn't any better having it read to me than it was to read it. [This would be the main reason I've shaved a half-star off of previous review ratings. It really got on my nerves this time round.]

In general, this was a highly enjoyable version of a mystery by a well-loved author. I would love to hear Patrick Malahide read other novels and will have to look for more reading performances by this talented actor. ★★★ and 1/2.

First line: If one lives in Galloway, one either fishes or paints.

[If you'd like to decode the spoiler quote, then copy the coded portion, follow the link, and paste the the code into the box for decoding.]