This Club Frowns on Murder 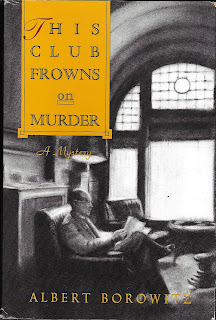 This Club Frowns on Murder (1990) by Albert Borowitz

Members of the Alumni Club (connected to a famous University) in New York City have been receiving odd little poison pen letters. They come in the form of letters of condolence, commiserating with loved ones over the death of a much-missed member of the Club. Except none of the members are dead...yet.

Rodney Baker, a member of the governing committee, invites his old friend Paul Prye and his wife Alice to come and stay at the Club--the Pryes have recently had to leave their home to remodelers after a faulty toaster literally toasted portions of their home. Prye is true-crime historian with an expertise in crimes involving poison pens and had recently helped solve a current-day mystery and Baker would like Prye to use his knowledge to investigate the Club's recent troubles.

At first it looks like a classic case of someone venting pent-up frustrations, but it isn't long before Prye uncovers old grudges, embarrassing secrets, and unquenched hatreds running amok in the hushed halls of the Club. The members claim to be helping Prye, but few answer his questions with anything like candor and not even the first murder shakes their resolve to say as little as possible. But when Prye's friend Baker becomes the next victim, everyone begins to take things more seriously. The difficulty is figuring out which grudge or secret is so great that someone needed to kill?

Actually, the real difficulty is that this mystery just never really takes off. The opening is good and the scenes at the Club prior to the Pryes installation on the premises are promising. But Prye's investigative methods are clumsy and just not all that interesting. I honestly think his wife Alice would have made a better detective--she asks him all the right questions. When Prye was conducting his interviews, I just honestly didn't care who did it and there was no sense of urgency about his trying to find out. The book flap insists that Borowitz has written a mystery in the classic style--if classic style means with few clues and little hope that the reader will figure it out before the end, then I guess he did. This may be a spoiler, but I can tell you that in all honesty I had completely forgotten that the culprit even existed--that's how few clues to their guilt there were. I intended to give two and a half stars--but as I'm writing this review I realize that is a bit much. ★★ only.

First line: The University's color was oxblood, and the Alumni Club in New York City never let you forget it.

Last line: I have boundless faith in the Oversight Committee; they'll add a new rule in the next edition.

Wow, you're plowing through your challenge list this year! I'm sorry this one turned out to be a dissapointment.

Yes, I'm chugging right along. We'll see if I keep up the pace.

I was rather disappointed--I always look forward to a mystery with academic connections.