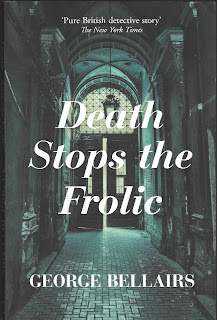 Death Stops the Frolic (aka Turmoil in Zion; 1943) by George Bellairs (Harold Blundell)

The village of Swarebridge is all set to celebrate the anniversary of the Zion Chapel, the central religious community for the town, with an annual tea. The celebration includes a "tea" (really a large feast at which the members seem out to investigate just what is so sinful about about gluttony anyway...), followed by singing (but no dancing), recitations, and a game of "Follow-My-Leader" led by the Alderman Harbuttle. The Alderman is known for being very strict on religious matters, but uncharacteristically leads them on a much more intricate route...straight into the church sanctuary. Due to the blackout because of the war, all is in darkness, so no one is sure what has happened at first when the Alderman disappears from the front of the line. Careful investigation reveals that he has fallen down a trap door--mysteriously left open--and is now dead. But the fall didn't kill him. Oh, no. Someone waited at the bottom of the opening and stuck a very sharp bread knife into him.

Superintendent Nankivell is on the spot (ready to see his wife home from the revels) and immediately begins an investigation that reveals many who had differences with the Alderman, a few with real motives, but apparently no one with opportunity. Patient investigation and a bit of local knowledge is what it will take to get to the bottom of this one.

The best part of the book is the descriptions of small village life during World War II. The talk of the black outs, rationing, black market goods, and an installation of military men nearby all serve as reminders that Britain is in the middle of wartime. Bellairs gives a good sketch of the village and its inhabitants and the reader feels as though she knew the place and people well.

But the story itself is a mess--as is the writing style overall. For reasons known only to himself, Bellairs provides bizarre switches from present tense to past tense which completely upsets the flow of the narrative. There is no purpose to such tense changes that I can see. The basic motive and mystery plot is fine, but it does get lost somewhat between the really very good descriptions and the weird tense changes. The cluing isn't the best either. And, finally,  I'm afraid I balk at classic crime novels that kill off children. The murder of poor little Willie really wasn't necessary to the story line except to add another body to the mix. I'm afraid that Bellairs really lets readers down in this one. Not one of his best and I can't really recommend it. ★★

First line: To the west of the Great North Road and just where it chops off a portion of the eastern fringe of Brentshire, there lies a district of England which has given its name to a fine breed of sheep, a heavy-cropping tomato, an inferior mangel-wurzel, and a now obsolete form of the ague found there before the marshes were drained.

Last line: The air feels cold and damp, and outside, the setter, which Nankivell has tied to a doorknob to await him, howls miserably for human company.

Deaths = 3 (one stabbed; one strangled; one car accident)