Portrait of a Dead Heiress 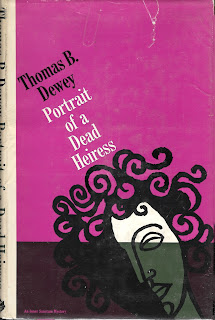 Apparently Lorrie King, a beautiful young Chicago heiress, wanted to make her death triple-sure--after taking sleeping pills, she got into a full-to-the-brim bathtub, slit her wrists, and then drowned. But her fiancé, a devoted doctor, doesn't believe it. There was no suicide note and he tells Mac, the private eye he's hired to investigate, that there was no indication that Lorrie had anything to commit suicide over. Dr. Peter Kramm hires Mac to discover the truth and, if it really was suicide, find out who drove her to it.

Mac has barely begun to investigate before it looks like the doctor may be right...because if the police really believed in suicide then why is Detective Saunders still sniffing around and dogging Mac's footsteps? That's not the only odd thing--Mac discovers a cache of paper slips with notations in some sort of personal shorthand. At first, he thinks they're betting slips but can't figure why she'd hide two years' worth. Matching the slips up with huge periodic bank withdrawals, he begins to see a sinister pattern. There's Theresa Russ and her family--who knew Lorrie but are so reluctant to talk about her. Then, of course, there's the question of why Big Danny (a big shot in a little way) has taken such an interest in Mac and his investigation. The private eye also finds evidence of arguments with an artist whose work Lorrie had bought and supported for several years. Plenty of possibilities, but what is the answer? And will the client like it when Mac finds it?

I'm not finding that I have a whole lot to say about this one. I don't much care for the solution and can't quite decide if Dewey has reasons (beyond the page) for why he chose the culprit he did. That's probably saying too much and will be a spoiler if anyone reads my review (such as it is) and heads right off to read the book. I definitely can't say more without thoroughly spoiling the plot. The whole set up just makes me feel rather grubby and like I need a shower. The one saving grace in the whole thing is Mac. His character comes shining through--a good detective and an all-around good Joe. I've a few more books by Dewey on the TBR shelves and I hope that those stories are more in line with quality of the detective. ★★

First lines: When Lorrie King, twenty-six, reached an ending, she filled the bathtub, took a large dose of Seconal, climbed into the tub, and slashed her wrists. Needless to say, she died--of drowning.

Last line: The telephone rang again, once again, and stopped abruptly as the receiver went up at the other end.

Deaths = 2 (one drowned; one stabbed)

Killing yourself in 3 ways is pretty ingenious.

Sounds like you have taken one for the team with this read!

Laura: Three different methods just seems like a bit much.

Kate: Definitely not one that I recommend...