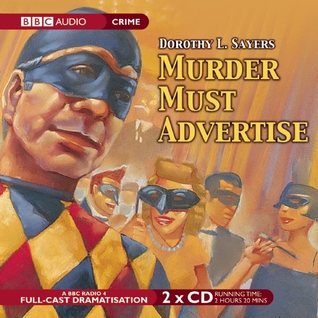 Murder Must Advertise (1933) by Dorothy L. Sayers
BBC Audio Version with Ian Carmichael as Lord Peter Wimsey
I love the Lord Peter Wimsey books by Sayers. They are my comfort reads and I have gone back to them more times over the years than I can count. I've read various editions (as I keep adding different editions to my collection. I've listened to Ian Carmichael read the entire story. I've listened to (and don't recommend unless you're looking for a soporific)  John Franklyn-Robbins doing so as well. And now I've listend to the BBC full-cast dramatisation. If you'd like a full review of the story, I've done that previously (HERE). This is merely my reflections on the BBC production.
Ian Carmichael is, as ever, a delight. He was the first Wimsey I watched in the televised version and, though the BBC waited until he was a bit old for the early novels, he does the younger, more frivolous Wimsey very well and his is always the voice I hear in my head when I read the books myself. The rest of the cast is quite strong as well--though I do think that John Hallam who played Mr. Ingleby in the televised version caught the spirit of Sayers's character more accurately than did John Quentin in the radio dramatision. One other small disappointment was the condensation of Miss Meteyard's part with that of Miss Parton. In the book (and TV program) Miss Meteyard is a copy-writer on an equal footing with the men. Here she has been relegated to the typing pool. But beyond these small quibbles, this is an excellent production and a delight to listen to. ★★★★
First Line: "And by the way," said Mr. Hankin, arresting Miss Rossiter as she rose to go, "there is a new copy-writer coming in today."
Last line: "Advertise or go under."
*********************
Deaths = 5 (three hit; one shot; one stabbed)