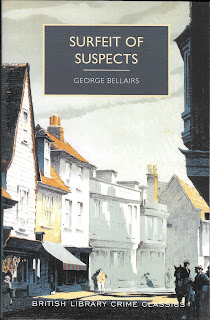 The growing town of Evingden is rocked by explosion one November evening. It blasts the windows out of shops and houses and completely destroys the offices of the Excelsior Joinery Company, as well as reducing the number of directors from five to two in one fell swoop. When the arson experts get done investigating, it's clear that someone has used dynamite to blow up the building. Did someone have it in for the company--or these particular directors? Or maybe it was more personal and two of the men were caught in a plot aimed at only one of them? Chief Inspector Littlejohn of Scotland Yard is dispatched to get to the bottom of the mystery. He discovers that the company was in deep financial trouble and that the directors' had sunk everything they had into trying to save it. He also discovers that a life insurance policy taken out on one of the victims (with their lending bank as beneficiary) will save the company from ruin. Could that be the motive? But as he and Inspector Cromwell keep digging, they unearth more skeletons in the Evingden closets. And one of them was definitely worth killing for.

Surfeit: (noun) an excessive amount of something

I hate to disagree with an author and all, but there really isn't an excessive amount of suspects here (despite the description of the plot above). Honestly, there aren't that many suspects that one can take seriously once we really start examining the supposed motives. That would be one of the major reasons this is a three-star book and not four (or more). While there are plenty of less-than-desirable characters wandering around, it seemed pretty obvious who the main suspect was--though I did find it a bit baffling (for quite some time) how s/he got their hands on the dynamite. But Bellairs explains that nicely. The ending is a bit weak as well, with Littlejohn bluffing his way through a confrontation and the culprit conveniently having a stroke to indicate his/her guilt.

I still enjoy Littlejohn's character and it was interesting to follow him and Cromwell about in their investigation. And it's well worth the price of admission to watch Littlejohn's exchange with the Fraud Squad personnel. Overall, a solid, though less mystifying entry in the Littlejohn exploits. ★★★

First line: At eight o'clock in the evening on the 8th of November, there was a terrific explosion in Green Lane, Evingden.

Last line: He got himself a job somewhere in Australia, for Mr. Fpevobzn [ROT 13] is in gaol for two years and Ohtyre [ROT13] doesn't know what mood he will be in when he gets out.

[If you'd like to decode names (which are slight spoilers), then copy the coded portion, follow the link, and paste the the code into the box for decoding.]