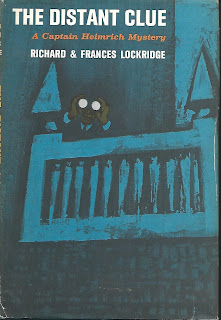 The Distant Clue (1963) by Frances and Richard Lockridge

The elderly lawyer and the elderly librarian were sitting across from each other in Homer Lenox's study. Neither spoke when Miss Enid Vance stopped by with typed copy of pages in the lawyer's book The Families of Putnam County, New York. Neither would ever speak again. Lenox and his friend, retired Professor Wingate, have both been shot in what looks like a murder-suicide. The gun is lying near Lenox's hand.

Captain Heimrich is called in to determine whether the case is as simple as it looks. And...well, since this is a murder mystery novel, it's no spoiler to say...it's not. Wingate had been providing Lenox with books, newspaper articles, and family papers to help the lawyer with his research. Is the motive for the deaths buried somewhere in Putnam County's past? Did Wingate provide materials that led Lenox to uncover some secret from the past? But then there's the fact that Lenox was the driver in a fatal accident. He was officially cleared of blame...but does someone still hold him responsible? And did Wingate just wind up being in the wrong place at the wrong time? There's also the fact that Lenox bought some high-powered binoculars and could see his neighbors (even quite far away) more clearly than they might have preferred. Oh...and there's all that pretty money that his adopted step-son will now inherit.

This one is quite as fairly clued as one might like...though there's plenty of pointers that could set the armchair detective on the right track. The motive isn't really evident until quite late in the game. I had my eye on the culprit all along, just didn't know quite why they might have done it. Still loving the characters and watching Heimrich and Forniss go through their investigations. ★★★★

First line: When she stepped through the doorway to the sidewalk of Van Brunt Avenue heat stepped forward to meet her.

Two men kill each other and no third person in it. The temptation to let it lie there must have been almost irresistible. But amateur murderers, unlike those whose business is killing, are inclined not let well enough alone, to add refinements to a situation quite good enough as is. Of this the police are normally appreciative. (p. 54)

[about Professor Wingate] He was a nice, easy-going bloke, getting along in years. His classes were popular enough, but the kids didn't stand in line exactly. Far as I ever heard, he didn't quarrel with anybody. And you wouldn't know it, Charles, but that's a trick in faculty life....One hell of a trick. (Artemus Goodbody; p. 66)

Last line: He got to god before god disappeared, as god was all the time doing. (Colonel, the dog, in reference to his boy Michael)