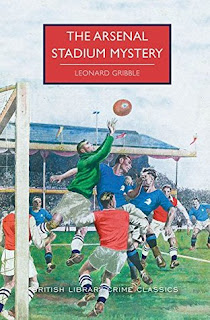 Francis Kindilett has worked for several years to put together an amateur football (soccer) team that will be good enough to take on the best of the professional teams: the Arsenal Gunners. The day has finally come for the big match and he's sure his Trojans are up to the competition. The soccer stands are jam-packed and 70,000 fans are on hand to watch their favorites. The match is hard-fought in the first half with Arsenal gaining a one-nothing advantage and then John Doyce manages a beautiful penalty kick at the beginning of the second half to tie the score. Just as the momentum seems to shift to the amateurs, Doyce goes down on the field.

No one had tackled Doyce. He had been alone when he fell. He had simply folded up like a jack-knife and slipped to the ground.

The ailing player is carried off the field, but nothing the trainer does can rouse Doyce. He's unresponsive and sweating uncontrollably and just after the match has ended so has Doyce's life. Scotland Yard is called in and it's determined that Doyce was murdered with an alkaloid poison. Inspector Slade is the Yard's man and is soon on the hunt for the sender of a mysterious package which arrived for Doyce just in time for half-time; a pretty young blonde woman who asked for Doyce and ran off when told he was dead; and the meaning behind a clipping that accompanied the package which referred to a drowned girl.

Doyce was new to the Trojan squad and didn't have many friends, though there others on the team who had known him from earlier soccer teams. There was a certain coolness between Doyce and his partner in an insurance company, Phil Morring (who also plays for the Trojans), and several of the players though Doyce rather too full of himself, but is there really a motive in all that? Inspector Slade and Sergeant Clinton will have to find out. There's also a wife that no one knew Doyce had--a wife with a devoted admirer.

I have to say...I've never read a soccer match mystery. Gribble gives just enough of the football action to set the stage and provide the setting for the murder without letting the sport overshadow the mystery. It was quite unique to have the members of the actual Arsenal team of 1939 involved in the mystery (though, of course, we all know that none of them will wind up being the murderer). It's very entertaining and nicely plotted. And he did a fine job making me focus on a particular item and derailing my attempt to spot the killer before Slade. I was a teensy bit disappointed that the particular item didn't wind up figuring in the solution at all...but overall I enjoyed this quite a lot. ★★★★

First line: There was a sudden, expectant hush as Tom Whittaker walked into the dressing-room of the Arsenal team at Highbury, the same hush he had been greeted with for years, on every Arsenal home-match day.

Last line: They went out of the room, leaving Kindilett staring out of the window and seeing nothing, a grey-haired man alone with his thoughts.

Deaths = 2 (one poisoned; one drowned)