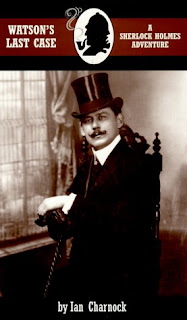 This book is a mish-mash. We start with Watson meeting up with "young Stamford" once again in the Criterion bar. Stamford is our narrator--relaying stories about Watson's "cases" in the years of World War I. The first (smaller) section deals with Watson on an undercover mission to check up on T. E. Lawrence and his doings in and around Damascus and Jerusalem. There are rumors that Lawrence has grown unstable and if he is, then Britain's interest in the Middle East may be at stake. Holmes is busy wit other war work, so Mycroft sends Watson as a trusted and able servant of the Crown.

Once the story of Lawrence is finished, we move on to Watson's work in Russia. He is sent to determine exactly what is wrong with the heir to the Russian throne, Tsarovich Alexis. Watson is also to try and do something about the hold Rasputin has over the Tsarina. There are rumors of idiocy and strange illnesses--Mycroft Holmes is certain that it is hemophilia and that Watson can help royal family if anyone can. His job also entails gathering what intelligence he can about the rumors of revolt. Of course, history tells us of the revolution in Russia and that the fate of the Romanovs is not a pleasant one. In a strange twist, Mycroft seems oddly content at the end of this section (despite the fact that he seemed to have indicated that he wanted Watson to provide information that would avert the revolt if possible).

The final section gives purported background on the early life of Sherlock Holmes, Watson, and Stamford. Stamford seems to know a great deal about the detective. I'm not clear on how he knows all this. I can't see Holmes sharing family history and secrets with the man when he shared so little with his closest friend Watson. Stamford also provides a shorter description of Watson's life pre-Holmes and then wraps up with a brief biography of himself.

I honestly can't say that this was very successful as a story--or a collection. To call these adventures of Watson's "cases" is overstating their status. A watching brief is what I'd call both assignments. Watson does absolutely nothing to affect Lawrence in any way and I can't see that constructing the storyline did much at all for the Holmes/Watson canon. Watson is a bit more involved in the Russian events--but, of course, his efforts to save the royal family fail. And again it doesn't seem like his presence in Russia had much purpose.

The best I can say for the book is that it gives some interesting historical detail on the events surrounding the Arab and Russian revolts during the early 1900s. But, to be honest, one would do better to read a good history book or two about the events than to read a book supposedly set in the world of Holmes and Watson. Not recommended. ★

First line: Well do I remember meeting John H. Watson, M. D. in the Criterion bar all those years ago.

Last line: The bar of the Criterion was a welcome and safe harbor.

Deaths = 4 (one natural, one shot; one beaten to death; one stabbed)