Blood on the Dining-Room Floor 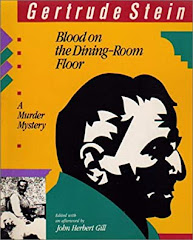 Blood on the Dining-Room Floor (1948) by Gertrude Stein.

Taking a cue from the Puzzle Doctor's review of The Rat Began to Gnaw the Rope, I'll be sprinkling a few definitions and my responses throughout.

Don't expect me to give you a plot synopsis on this one. I don't find that to be even remotely possible. If there's a plot hidden in there, it went completely over my head. The afterword explains (as well as possible) what this is supposed to be about, but I'm still not convinced. AND...it doesn't address where the blood on the dining-room floor came from and what it has to do with anything. The only possible crime/mystery involved seems to be attached to a death at a hotel and has nothing whatsoever to do with the country house introduced in the first chapter or with its dining room.

According to the cover of my edition, this is Blood on the Dining-Room Floor: A Murder Mystery*.

*a novel, play, or movie dealing with a puzzling crime, especially a murder.

And here on the Block, we follow that standard definition. Mysteries are my primary reading fare and I enjoy a good murder plot. This being the case, I can tell you that whatever Gertrude Stein has written...it's not a mystery. Unless....

*something that is difficult or impossible to understand or explain.

we want to go with this second definition of mystery. Because, by golly, she's got that "difficult or impossible to understand" thing down cold. Stream of consciousness writers and I don't exactly get on well and why on earth they think the rest of us want to know every little thought that pops into their heads is beyond me. If (and this is a mighty big if) she had wanted to do a stream of consciousness mystery and had actually woven a real plot into the thoughts that were popping up on the page, I might have gone along with it. It might have been a nice experiment--especially if she had made it an examination of the type of crime she was interested in--something in the vein of the Lizzie Borden case where the killer got away with it. After all, Faulkner liked to do this sort of thing and he wrote Intruder in the Dust...a mystery with a powerful dose of social commentary...and I thought it was pretty terrific.

But is that what she did? No. She wrote a mish-mash of I don't know what and you can't see the crime (if there is one) for the extraneous bits and pieces which can't even be considered red herrings because there are too many of them and there doesn't seem to be anything substantial for them to be distracting the reader from. The blurb also describes this as "a droll** detective novel"

**curious or unusual in a way that provokes dry amusement

There was no amusement to be had--dry, wet, or otherwise. It was a long, hard slog to finish this short little book. The piece is a mere one hundred pages long (including afterword) and yet I felt like I was struggling through a tome three or four times as long. Unrated--because I can't even think what to do with it.

Last lines: No one is amiss after servants are changed. Are they.

Deaths = one (fell from height)

I am sorry you had such a bad read but it did lead to a very entertaining review, so I guess there was a silver lining of sorts. I feel your pain with reading stream of consciousness. It is an absolute pain to read. I had to read Ulysses for my uni degree. It is the only time I had to buy cliffnotes for a set text. I would read a chapter of the book and then read the chapter in cliffnotes, so I could find out what the chapter was about!

Thanks, Kate. I'm just glad this was short. I've slogged through Ulysses as well and can only say that the one thing Stein has over Joyce is that she said what she had to say (whatever that was...) in much less space.