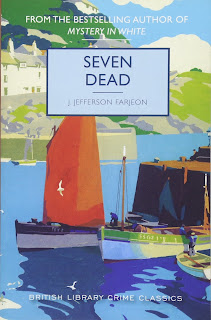 "There's some mighty queer story behind this, and maybe, when we've unearthed it--as we're going to--suicide will fit the climax. But I'm not going to accept that theory until it's explained to me how they got into the house, why they nailed up the shutters, why they stuffed two weeks' papers up the chimney, how they destroyed themselves--that's your job, doctor....who used the revolver, why he or she shot a picture in another room, where the Fenners are, why they left in a hurry, and how the devil--here's another little tit-bit I've just had from the station, Mr. Hazeldean--how the devil these seven people, before settling down to their final job, locked themselves in the drawing room with the key on the outside." ~Inspector Kendall; Seven Dead (1939) by J. Jefferson Farjeon

The title is just a tad misleading--there are more than seven deaths in the story, but it is the seven bodies found together in one abandoned house that sets the investigation off with a gruesome beginning. Ted Lyte, petty thief and pickpocket, spies an empty house and decides to make a career move--into the housebreaking business. The house is nice and isolated, on the outskirts of a village. It has an abandoned air about it. There's no one in sight and the shuttered windows just seem to call his name. So, he goes round to the back and makes his way through a window into the kitchen. After fortifying himself with some bread and cheese, he finds a splendid bit of silver, scoops it up, and wonders what else there might be. But, being all nervous on his first ever spot of burglary, he decides to take what he's got and run.

And yet...there's a door with a key in it that tempts him. His curiosity gets the better of him (much to his regret) and he opens the door and finds--not a treasure in need of safe-keeping, but seven people. All dead. He takes to his heels, shedding silverware along way, until he runs into Thomas Hazeldean, amateur yachtsman and freelance journalist, who spots him as the petty thief he is. He also recognizes that the gibbering man has had quite a fright and hauls him off to the police station where Inspector Kendall has been bemoaning how quiet it has been in detective-land. That's all about to change....

Hazeldean and Kendall form an alliance of sorts and begin investigating the mystery. One clue is a revolver bullet hole in the portrait of a very pretty young woman, Miss Fenner. Miss Dora Fenner and her uncle are the legitimate residents of Haven House, but they are not among the seven found dead in the drawing room. All evidence points to the Fenners have left the place in a hurry. Hazeldean follows the Fenner trail to Boulogne, France where he runs into a mysterious silk merchant and suspicious and uncommunicative servants. He does manage to track down Miss Fenner, but before he can really get down to discussing the mystery with her, he is hit over the head and locked in a room.

Meanwhile, Inspector Kendall has been uncovering clues at Haven House. He's got everything from two dead cats, a missing bicycle, a hidden laboratory, and an abandoned lifeboat from an ocean-going vessel. All trails lead to France, where Mr. Frenner is missing, his friend--a certain Dr. Jones--has died in a plane crash, and a lot of rough house has been going on in the boarding house where they all lived while in France. Kendall and Hazeldean uncover most of the answers--but they won't get the final solution until they make one final trip in Hazeldean's boat.

~~~Spoiler ahead. Read at your own risk (especially the second paragraph below)

This is an interesting and eclectic hodge-podge of a book. It starts out in classic detective mode with a dash of possibly impossible crime thrown in. It then moves into a thrilleresque mode, and ends with a chase scene that is done slightly in reverse. I thoroughly enjoyed another outing with Inspector Kendall (whom I first met in Thirteen Guests). He is a steady copper with a somewhat quirky sense of humor (I don't think Sergeant Wade appreciates it as much I do, though) and an intelligent penchant for noticing details. Hazeldean is also a nicely fleshed-out character, though he does seem to have been invented expressly to fulfill the thriller-hero role in the second portion of the adventure and to fall in love with Miss Fenner. Still, he does do a good bit of detective work himself.

I plume myself on having pinpointed the killer's identity (and most of the slight twist involved). Fortunately, that didn't spoil my enjoyment of the story. I did find the ending to be a bit anti-climatic and wish there had been a better way of revealing ALL to us. I'm also a bit baffled as to how our killer knew to stuff the chimney with newspapers ahead of time. He obviously couldn't do it while seven people were sitting there watching him. Was he just a boy scout gone bad and "always prepared" in case he needed to knock off a few people? But...putting aside those few quibbles, I thought this well-plotted and quite enjoyable. ★★★★

This book has also been examined by John at Pretty Sinister Books; Rick at The Mystillery; Kate at Cross Examing Crime; The Puzzle Doctor at In Search of the Classic Mystery Novel; and Aidan at Mysteries Ahoy!

First lines: This is not Ted Lyte's story. He merely had the excessive misfortune to come into it 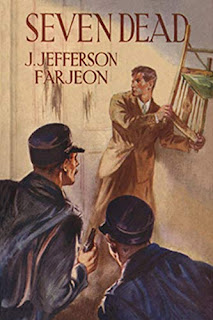 and to remain in it longer than he wanted.

"I'm blowed!" said Wade. "You shouldn't be," answered Kendall. "This is what we've come after, isn't it?" "You don't always find what you've come after," hedged Wade.

Deaths = 12 (seven gassed; one plane crash; one stabbed; one natural; one shot; one drowned)

Ahem! I was the first to write about this book. Two full years before it was reprinted I might add. I wrote about it because I disliked the Farjeon books that were being chosen. Then after my post appeared Martin Edwards read the book and miraculously a new edition appeared from BLCC. Not at all a coincidence if you ask me. Same thing happened with Antidote to Venom. But I’ve never been given credit for either. For some reason I’m constantly overlooked for what I’ve been doing for the past ten years — being instrumental in getting forgotten books reprinted. But I’m not bitter at all. Ha!

I'm sorry, John! The Google algorithm missed you when I searched for reviews by my blogging friends. Will add you to the list!

I realize now that the post did not have Seven Dead in the post’s title but rather the author’s name. That makes it easily missed in searches. I should just calm the hell diwn. Pass me the Paxil.