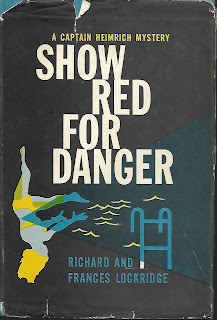 Hollywood has come to the Hudson Valley and the acting crowd brings a real show-stopper to Van Brunt. The beautiful Peggy Belford used to be married to resident artist Brian Collins...that was a few husbands ago. And now she has been found shot to death, lying artfully arranged beside his swimming pool. Inside the house, Collins is also dead, an apparent suicide with a gun on the floor beneath his hand.

Susan Faye had an appointment to meet Collins at his house to view a sketch that the artist thought she might work up into a fabric print (that being her business). She brings Captain M. L. Heimrich along on the way to dinner out and find the bodies as described. When Susan sees the set-up, her artistic eye registers how very staged it seems, how very much like an artist's composition. And something else strikes her as "wrong" about Collins's workroom, but she's just not quite sure what. Heimrich's experience also tells him that there is something phony about the situation, so he and Sergeant Forniss start looking for someone who fills the role of murderer in this little drama.

The Hollywood crew would prefer that the police decide that it is exactly what it looks like...murder-suicide. But there are plenty of people who might have wanted one or both of the victims dead. Francis Dale, middle-aged star; George Latham, a handsome up-and-coming actor; and Paul Marley, the producer--all who have had romantic entanglements with the lady. Anton Zersk, who is the director and a refugee from Eastern Europe with a possibly murky past. Chris Waggoner is a young woman who sees herself in spotlight and had a large case of jealousy where Peggy was concerned. And then there's Roland Fielding, the last of Peggy's ex-husbands, who may have resented those alimony payments more than he lets on.

Here he was confronted with a handful of people who, it might be said, lied for a living. Perhaps the word was harsh; fact was inescapable. An actor lives by pretending--with voice, with facial muscles, with the whole of the body--to be someone he is not. (p. 123)

With a cast of suspects whose business is to make the unreal believable, Heimrich has his work cut out for him to sift the truth from the lies. And Susan's nagging worry about what was wrong about the artist's workroom, will place her in danger once again when the murderer, wearing a disguise, tracks her down to try and make sure she doesn't remember.

Another fun, comfortable mystery from the Lockridges. A fairly straight-forward plot with one significant fact that might be taken as a red herring. If it is, then they might fool you. If it's not, then you might think the mystery was too transparent. With the Lockridge stories, I don't worry much about how easy it is to spot the villain. I just settle down and enjoy the ride. ★★★ and 1/2.

First line: From where they sat they could see the Hudson.

People, even people one had known for years, sometimes did the most unlikely, the most inexplicable, things. (p. 77)

Last line: "I like mine soft-boiled," Heimrich said, with great tenderness.