The Secret at Shadow Ranch 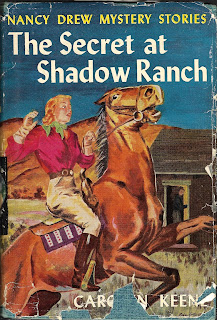 Bess Marvin and George Fayne have been invited by their aunt and uncle to spend the summer at Shadow Ranch in Arizona. Aunt Nell and Uncle Richard Rawley have recently acquired the ranch and Aunt Nell is traveling west to see if it's worth keeping or getting into shape to sell. The two girls, along with Nancy as their guest, and another cousin, Alice Regor, will serve as companions for Aunt Nell who doesn't relish the trip. Of course, since Nancy is involved, we know there will be a mystery or two along the way. In fact, they start out with one--Alice's father disappeared about eight years ago and everyone assumes he just abandoned his family, but Alice doesn't believe it. Nancy wants to help her, but can't see what can be done on a trip to Arizona when Robert Regor disappeared in Philadelphia. But maybe she'll have time to come up with a plan that can be put into action when they get back home...

Meanwhile, there is a mystery waiting at Shadow Ranch. A woman named Martha seems to be keeping her "granddaughter" Lucy prisoner in a cabin on the edge of the ranch. Nancy is concerned about the girl and must investigate to discover what's going on--is Martha really the grandmother? (the girl says not) If not, why she keeping Lucy from talking to anyone? Why does the suspicious Zany Shaw (owner of an antique shop) keep hanging around and why does Martha seem afraid of him? Once Nancy can answer all these questions, she'll be able to provide Lucy with some real help. There's also Ross Rogers, a man who seems reluctant to interact with any of the Easterners--does he have something to hide? Or does he need help too?

This is an entirely different story in the original text edition from the the one I read growing up [revised text version]. Many of the original stories underwent very simple updating which changed little about the plots, but this one has a different storyline altogether. In some ways, this is a more intricate plot, but I found that it had far less actual investigation on Nancy's part than early stories in the series. The focus is primarily on the adventures she and the other girls have while horseback riding in the mountains--facing a lynx, getting caught in a rainstorm, getting lost and sleeping in a cave all night, etc. The mysteries seem almost incidental. The only real investigative work is done off-stage by Carson Drew when Nancy sends a telegram and asks him to look for certain information in Philadelphia. It was a bit disappointing.

Of course, judging from my previous rating based on the revised text, Shadow Ranch has never been a favorite regardless of plot. I certainly don't recall rereading this one as many times as I did many of the others. I think I need to pull out my copy of the newer version to remind myself of the details. It will be interesting to see what I think of the phantom horse and treasure hunt 45 (or so) years later. ★★★

Last line: "Put out your sign. 'Carson Drew and Daughter.'"