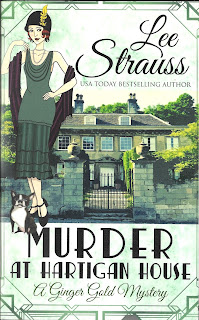 At the end of Ginger Gold's first adventure aboard the S. S. Rosa she receives a telegram from her British butler:

Ginger was on her way to Hartigan House to wrap up her recently deceased father's affairs before heading back to Boston. She'd already been involved in a mystery aboard ship during her journey and didn't expect to find another waiting in the attic of her house. But that's just what she's got. Locked in the room which belonged to her father's valet (when he was still living in England) is the dry-decomposed body of a woman wearing a very chic red evening gown. Estimates indicate that the body has been there since the house was closed up ten years ago.

When circumstances and circumstantial evidence begin to point towards her late father, Ginger determines to investigate and once again finds herself "assisting" Chief Inspector Basil Reed. He tries to discourage her, but finds her difficult to resist as she has a knack of getting her way without seeming to twist any arms. They discover that the woman (one Eunice Hathaway) attended the last party held at Hartigan House. So Ginger decides to hold another party "in memory of my father" and...coincidentally...invites the same people on the guest list from that previous soiree.  She's hoping to stir things up and make the villain give himself away. She doesn't expect to wind up with another corpse on her hands. She needs to hurry her detective work along...otherwise she may wind up playing the part of third victim.

This wound up being a less intricate puzzle than the first book, but no less fun for all that. Even though I spotted the pointers indicating the ultimate villain of the piece, I still didn't get quite all the details worked out before the reveal at the end. The series is just a lot of fun with great characters and I look forward to reading more of Ginger's adventures. ★★★ and 1/2.

Last lines: "I do." Ginger moved an open palm through the air like a banner. "I'm calling it Feathers & Flair."

Deaths = 3 (one strangled; one fell down stairs; one poisoned)