Three Thirds of a Ghost 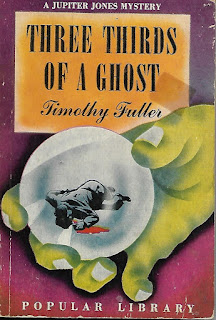 Three Thirds of a Ghost (1941) by Timothy Fuller

Edmund "Jupiter" Jones, an instructor in the Fine Arts Department of Harvard University, accompanies his girlfriend Betty Mahan to a literary event at the Bromfield Bookstore. George Newbury who has written many a mystery and recently (as one character puts it) has turned "from the potboiler to the roasting pan." His latest novels have featured thinly-veiled renditions of various Boston notables and it's rumored that his forthcoming book will skewer the Still family as well as a Max Schriber, a man who makes a living as a spiritualist. The Still family (mother, father, son, and daughter) and Schriber are all on hand to attend Newbury's talk at the bookstore. Also in attendance is Newbury's Chinese secretary, Lin, his agent Teale, a newspaper editor by the name of Day, Miller the owner of the bookstore, and Captain Hogan of the police.

Newbury barely gets started on his introductory remarks when his speech is cut short--permanently--by a gunshot. Someone at the back of the room shot the author in the middle of a crowd of people and not one person saw the shooter. Incredible! Both Jupiter Jones (fresh from having solved a murder in Harvard Has a Homicide) and Lin (who was the model for Newbury's detective "The Parrot") decide to play amateur detective and help Captain Hogan find the killer. But first they need to stop suspecting each other. When the policeman becomes the second victim, each of our amateur detectives decide to try and flush the killer out of hiding. Lin's plan falls through....but Jones uses a Schriber seance and a ghostly intervention to force a confession.

A very short impossible crime. Between them, Jones and Hogan (before he's shot) seem to prove that none of the primary suspects could have done it. In fact, given that no one saw the shot fired in a room full of people, it seems that no one could have done it. And yet we have a dead author. We also have an interesting solution--though it does seem to me that Jones kind of jumps to the solution rather than finding actual clues. I could have wished for a slightly longer book--with more focus on the suspects and a bit more actual detective work. But still a nicely done plot.

There is also a nifty discussion of murder mysteries about three-fourths of the way into the book--considering why they have been so fascinating to readers and whether they're on their way out of favor. Several of the characters seem to think mysteries have reached their peak--having done the variations to death. Having worn out the novelty of the genre and tiring of  the puzzle plot, they just can't imagine the mystery genre lasting much longer. I guess they'd be surprised to know that people are still reading them in 2021.

A quick, fairly engaging mystery read. I just wish there were a little more meat on the bones. ★★★

Also reviewed by Steve at Mystery*File

First line: Yes, thought Thomas Day, I can be flip with George Newbury.

Taylor sat down. "Look here, Jones. You seem like a sane guy and you got a good job. What makes you want to act like a cop?"  "I don't know exactly. Probably a deep psychological quirk, latent in everyone. Most people satisfy it by reading mysteries."

Last line: They let it go at that.