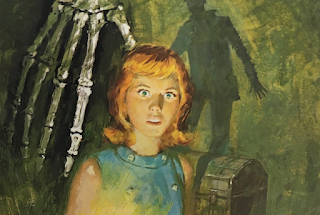 Back in 2018, Lanelle at The Challenge Factory on Goodreads* put together a reading challenge based on the original 56 Nancy Drew books. It was originally designed as a one year challenge. I missed seeing that at the time, but have decided to do the challenge on my own with no time limit--though I am going to try and finish it by the end of 2022. I plan on reading 56 books. The rules are simple:

This is a 1 year challenge.
No page limit. Re-reads are okay.You can read the book itself, or a book suggested by the title.
*You'll need to be a Goodreads member to view the original challenge.
LevelsHannah Gruen (the housekeeper): 1 - 9 booksBess Marvin (a delicate, feminine friend): 10 - 18 booksGeorge Fayne (described as a tomboy, friend): 19 - 27 booksCarson Drew (father and attorney): 28 - 35 booksNed Nickerson (boyfriend, student at college): 36 - 44 booksNancy Drew (sleuth extraordinaire): 45 - 56 books (my goal)1. The Secret of the Old Clock (1930) - read a time travel book: Star Trek Voyage to Adventure by Michael J. Dodge (1/22/22)