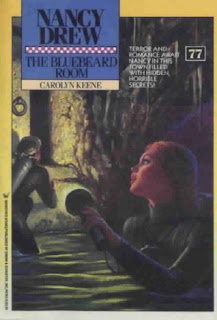 The Bluebeard Room (1985) by Carolyn Keene

Nancy, Bess, and George are visiting Nancy's Aunt Eloise in New York City. They are invited to a society function and just happen to meet British rock star Lance Warrick of the super-group Crowned Heads. But it's Nancy who has turned his head. Nancy also meets Olive Harwood, mother of one of Nancy's friends from River Heights. Lisa Harwood had married a British aristocrat in a fairy tale wedding, but from what Mrs. Harwood tells Nancy, it doesn't sound like they are living happily ever after. Lisa looks thin and haunted and Mrs. Harwood wants Nancy to go to England (at her expense) and get to the bottom of whatever is troubling her daughter.

Nancy agrees to go and finds herself in the middle of a mystery involving ancient statues, drugs, witchcraft, hypnosis, and hidden caves. She also finds herself juggling the attentions of Lance Warrick and a handsome young reporter by the name of Alan Trevor. Both men help Nancy unravel the mystery. But Nancy is the one who tracks down all the clues.

The basic mystery is pretty good as Nancy Drew plots go. Nancy makes logical deductions based on what clues she's able to find and takes the lead in investigating the hidden cave. But I do take great exception to the ghost writer having Nancy call Carson Drew "Daddy" (which she never did in the original hardbacks) and having her so very caught up in how she looks. It seemed to me that whoever wrote this under the Keene name had very little real knowledge of the character. And don't get me started on how many times her "heart skipped a beat" or her "pulse quickened" and it wasn't about some mysterious clue she noticed--oh, no. It was all to do with Lance "rock star" Warrick. I've never taken to the idea that her special beau Ned is being quietly shoved aside in these later novels. And I certainly am not a fan of making Nancy behave like the heroine of a romance novel. ★★

First line: "Guess who's at the party, Nancy!"

Last line: Nancy kissed each of her suitors and replied lightly, "I guess that's one riddle I haven't solved yet!"

Deaths = one burned at the stake