The Secret of the Golden Pavilion 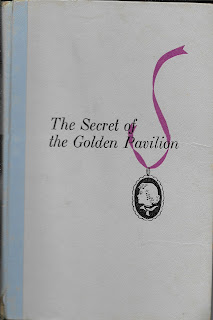 The Secret of the Golden Pavilion (1959) by Carolyn Keene

Nancy Drew and friends are off on another trip to mystery. This time the mystery awaits them in the new state of Hawaii. Carson Drew has been hired by Mr. Sakamiki to help with two problems. Sakamiki is the heir of his wealthy grandfather--but there are difficulties. First, his grandfather left a mysterious message referring to a secret on his estate, Kaluakua, which he has been unable to discover. And, second, there two surprise claimants to the estate. They say they are the grandchildren of the elder Sakamiki by a first wife that no one knew about. While Mr. Drew plans to head to California to investigate these new claimants, Mr. Sakamiki invites Nancy, Bess, George, and Hannah Gruen to go to Kaluakua and discover the secrets of the estate. Fortunately, Ned, Burt, and Dave will also be in Hawaii as part of an Emerson College trip, so they will be on hand to assist. Along the way, they will deal with a ghostly hula girl, members of a gang called the "Double Scorps," a hidden door in the estate's Golden Pavilion, as well asseveral attacks on Nancy, Ned, Mr. Drew, and Mr. Sakamiki's caretakers--including poisonous tacks hidden in a dark-flowered lei. There are also hidden clues (all in Polynesian) for Nancy to find. She soon puts them together to discover just what the secret of the Golden Pavilion is.

Since this book (in a tweed cover) was part of the set my mother handed on to me about forty-five years ago, it was one of the first Nancy Drew mysteries I ever read. It was never one of my favorites, though I'm not sure why. It has lots of puzzling clues to unravel. It has a ghost. It has plenty of action with all of Nancy's friends on hand. But for some reason it just never grabbed me the way The Secret of the Old Clock and The Hidden Staircase did. I reread those several times while growing up. I can't remember ever rereading Pavilion until now. It is actually an interesting mystery with several puzzle clues for Nancy to decipher. But--it still didn't wow me and I don't feel inclined to move it up in the ratings. It's always been a three-star story to me and so it will stay. ★★★

First line: Nancy Drew, her lovely blue eyes sparkling with excitement, stared in fascination from the cabin of a private helicopter.