The Queen & the Corpse 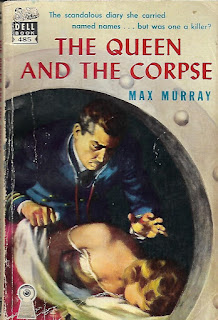 The first thing that happens (at least as far as the reader is concerned) on the Queen Alexandra, making her way from England to New York, is the discovery of a body. Peter Almsford, a handsome young Englishman, had a breakfast date with his next-cabin neighbor, Miss Leonora Blith. When she didn't answer his knock and her door came open, he found her shot to death across her bed. He calmly goes back to his own cabin, calls up his steward and tells him to inform the purser that there's been a murder, and then casually tosses a briefcase out the porthole into the Atlantic. The contents of the briefcase may be important in establishing motive, but no one needs to see what's in there. And, no, Almsford didn't do it. But he's going to find out who did.

It winds up that several people have reason to be grateful--A: to whomever got rid of Miss Blith and B: to Peter for ditching the briefcase. Miss Blith was the secretary to the late Felicity Emmabrau, a woman who had a knack of knowing everyone and knowing everyone's dirty little secrets. In fact, there's a whole host of passengers who seem to be connected in various ways--both to Felicity & Leonara and to each other. Felicity's will entrusted Leonora Blith with her diaries and memoranda and the secretary had been on her way to New York to turn the material over to a publish for a tell-all book. Unfortunately for the killer, Peter had snitched the bag before the murder. Fortunately, the contents of the bag will hurt no one now. Also on board is a young man who's new bride had been killed while on a train journey with her father (who doesn't know about the marriage). The father is also on board and when the two come face to face, he has reason to suspect that his new son-in-law may have shoved the girl to her death. But did he? And whether he did nor not, does that train death have anything to do with murderous spree that has begun onboard the Queen? Peter Almsford thinks it does...

Not quite as engaging as previous Murray books that I've read. Primarily, I think, because for most of the book I didn't really get the sense that there was much in the way of detecting going on--not by the purser who was tasked with the job by Commodore (captaining the ship) nor by Peter Almsford who supposedly took on the role of sleuth on his own. The only thing that the purser does is make notes in a file on the case (most of the notes we aren't privy to) and take in reports from the stewards about who tries to see Leonora Blith in her cabin or who tries to get her on the phone. Peter talks to a lot of people and sortof looks like he's doing something, but this reader still didn't believe he really was. And while I figured out the slightly well-worn trick of how someone could leave the initial victim's cabin and not be seen, there was no way on earth the reader could know the motive until all is revealed at the end. There is no hint of the reason. No clues, except for the vague feeling that Leonora Blith knew something about the person...and, well, that bulging briefcase was chock-full of secrets about several people on board. We just don't find out what any of them are until the big reveal. A pleasant read, but could use stronger detection activity and more clues for the reader. ★★★

First line: Ships' stewards are human beings like everybody else, but as Steward Everard Hopkins was apt to remark, "Who cares?"

Deaths = 6 (two shot; one hit by train; two drowned; one fell from height)