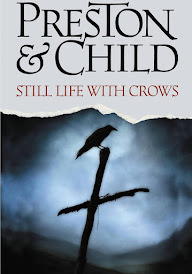 Medicine Creek, Kansas, like many small towns across America, is slowly dying. The young people grow up, leave town, and never come back. There's only one major employer--a turkey processing plant--and it has had to cut back on the number of shifts. The University of Kansas is looking for an area to test a new hybrid corn and they have narrowed the location down to Medicine Creek and the nearby town of Deeper. Being awarded the deal could breathe new life into the chosen community.

But just as negotiations reach the final stages, people begin dying in earnest. The first body is found in circle-shaped clearing in the middle of one of the miles of cornfield. The woman has been horribly mutilated and arranged in a tableau complete with dead crows atop genuine, Civil War-era Native American arrows.Sheriff Dent Hazen doesn't know it yet, but his first murder case is going to be a doozy. FBI Special Agent Aloysius Pendergast arrives from New York, suspecting that the murder bears the hallmarks of a serial killer. When more murders follow, it looks like he is right. The folks of Medicine Creek would like to believe that a crazed stranger is responsible, but Pendergast also suspects the culprit is more of the home-grown variety.

The arrows and the fact that the murdered woman had been digging in the Mounds just outside Medicine Creek revive the legend of the "Curse of the Forty-Fives," a story about a group of ex-Confederates who brutalized the Cheyenne--killing women and children--and who were, in turn, killed by the angry and anguished men who returned to find their families gone. The attack took place atop the Mounds and it is said that the leader of the ex-Confederates cursed the ground for all time. There is something supernatural about the strength needed for the particular method of murder and those who get a glimpse of the murderer and manage to survive describe him/it as a great hulking "creature." Has the creature been summoned by the disturbance of the Mounds? Or is there a more human agent using the legend for his own ends? Pendergast takes on a local young woman as an assistant who is snatched by the murderer. He will have to work quickly to put the clues together and find her before she becomes the latest victim...

Preston and Child certainly know how to write an edge-of-the-seat, scare-the-crap-out-of-you thriller that is so absorbing and fast-paced that even I (the biggest coward when it comes to horror and grisly murders) can read the thing straight through, hanging on every word, and impatient to find out what it's all about. Pendergast is an interesting, nuanced character. We get hints that his is an unusual back story and I certainly hope that we learn more about him as the series goes along. I appreciated seeing his softer side as he plainly wants to give Corrie Swanson (the assistant he takes on from Medicine Creek) a way to make a new start in life (if she gets a chance...).

But, beyond the small quibbles mentioned in the spoiler above, overall this is another excellent thriller Preston and Child. I look forward to reading more of the Pendergast series. ★★★★

Medicine Creek is an all-American town, and everybody's got a skeleton in his closet. Or her closet. (Corrie Swanson; p. 80)

I have found that liars in the end communicate more truth than do truth tellers....Because truth is the safest lie. (Pendergast; 134)

I find nothing more tiresome in life than explanations. (Pendergast; 210)

It is a capital mistake to develop a premature hypothesis in the absence of hard data. (Pendergast [echoing Holmes]; 213)

Last line: The cluster of psychiatrists and students at the glass did not even notice the dark, slender presence slip away, they were so busy discussing just where the diagnosis would be found in the DSM-IV manual--or if, indeed, it would ever be found there at all.

Deaths = 11 (two shot; four strangled; one boiled to death; one natural--died of fright; two fell from height; one hit on head)