Death Among the Sunbathers 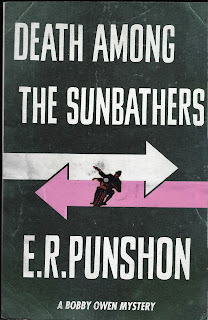 The second in the Bobby Owens detective series--where Owens is much talked about, but little seen. As one of the characters says:

Superintendent Mitchell and Inspector Ferris are returning to London from an interview with a very upset Lord Carripore. Carripore is the chairman of Universal Assurance, the primary insurer which has been hit hard by a series of fire claims. There is a bit of trouble with their car and while their driver sets about seeing to it, they witness a woman zip by, driving like blazes. They're not too surprised, therefore, when they hear the tell-tale sound of an accident. Quickly piling into the car, they arrive at the accident site in time to drag the woman's body from the burning car, but she's past help. They are puzzled that, despite her speed, she happened to have an accident at that particular point--the road was nice and straight. It isn't until a doctor arrives that it's revealed that she was dead before the car hit the embankment--for a gunshot.

They soon discover that the dead woman is a well-known journalist by the name of Jo Frankland and there are several possible motives. She had just been to Leadeane Grange, a kind of spa for sun worshippers (and sometimes nudists). That's a major fad just now, but not really hot news. Did something else draw her to spa? A fellow journalist seems to think she was on to a hot story. Maybe she meddled where she shouldn't have? But then there's also the huge fight she had with her husband and it appears that he was in the area at the right time. He was also seen to wave a Browning automatic around during the argument. His wife just happens to have been shot with a Browning automatic--and he has disappeared. There is also Maurice Keene, the young man her sister has been seeing. And Jo Frankland was actively trying to break that relationship up. He was also at the Grange that afternoon. Was that worth killing for? There's an old lag named Bobs-the--Boy hanging about as well. Why is he doing odd jobs for the Grange...and for Horace Hunter, a dealer in furs? Has Bobs-the-Boy started dealing in murder? And what about the mysterious motorcycle rider who had an argument with her on the road that day? He too has most conveniently disappeared right after their altercation.

While Mitchell and Ferris interview the suspects and follow the clues in the usual way, Bobby Owens is following his own line and keeping a low profile. He sends in regular reports to Mitchell with "information received" through his less obvious means of investigation. And, of course, he's johnny-on-the-spot when it comes time to round up the culprit/s.

So, despite this receiving a fairly positive review from Dorothy L. Sayers in her crime reviews (her main complaint is that we see far more of the villainous side of things than we do of Superintendent Mitchell and, most definitely, Bobby Owens), I found this to be far less engaging than Information Received (the first Bobby Owens book). I agree with Sayers that the format which focuses on the criminal/s is less than ideal and I was not fooled for a moment by activities of Bobby Owens. [to say more would let several cats out of the bag] I did appreciate the way all the plot threads were tied together and thoroughly enjoyed all the time we did get to spend with Mitchell and Ferris (though if Mitchell had said that something would "bear looking into" one more more time....). Overall, a solid plot and it was quite clever of Mitchell to spot the initial clue as to when Jo Frankland was killed. ★★★

"Ah," Bryan said quickly, "you're thinking of what I said about sun bathing being good for the mental activity as well. But Dodd--well, after all, the sun can't work miracles, can it? It must have something to go on on, mustn't it?" (p.98)

That's the worst of a woman, Ferris; what they mean and what they say are two things with a strictly limited connection. (Superintendent Mitchell; p. 102)

Last line: "You can cut away to bed now and I'll let you know when your fresh instructions are ready."

I was quite bored with the one Bobby Owens books I read, probably a Penguin paperback. I no longer remember the title, and I've never bothered to try another. And if I do, in spite of a few pluses, I really doubt it will be this one. Thanks for the review!

Steve: Yeah, I wouldn't recommend this as a starting point for the Bobby Owens books. It's decent and has it's moments where it's quite good--just not enough of them.