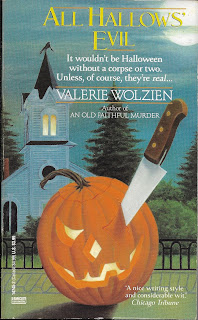 It's Halloween and the ghosts & goblins are out and about. And so are the monsters and....murderers. While a children's Halloween party is going on in the children's section, an unknown man is stabbed to death at the back of the nonfiction area. Susan Henshaw is looking at the cookbooks when she notices the body slumped against the wall. At first she thinks he's just a Halloween prop, but then he lets out a groan, looks at her briefly, and she realizes she's watching a man die. A second body, also stabbed, is found on his front porch--but this man isn't unknown. He is Jason Armstrong, the celebrity host of a popular morning talk show. Jason's wife, Rachel, is so upset and doesn't want to be home alone, so Susan and her husband invite her to stay at their house, little realizing the media circus they're about to become the center ring for...

When a homeless man confesses to the murders, Susan doesn't believe he's guilty and can't believe her old friend Police Chief Brett Fortesque is taking the confession seriously. She's quite sure that something fishy is going on at the library and that it's nothing to do with the homeless. She just doesn't realize how many dirty little secrets are hidden among Hancock's quiet citizens. But which secret drove a killer to stab these particular men?

Spoilers Ahead--Read at Your Own Risk!

So...this wasn't terribly good. The amateur detective solves this by pure inspiration, apparently. Stopping in the middle of thinking about where the first body lay and just shouting, "Brett! I know." Boom. Haven't really gathered any clues. Haven't really gotten anybody to talk about the mystery at all. But, hey, we know who did it. Oh, and the whole bit about having Rachel stay at Susan's house and the television folks creating havoc? I'm thinking that was supposed to comic relief or something. If so--it wasn't. It was just plain annoying. As was the nosy neighbor, Amy Ellsworth. And, for the record, the motive is bizarre and makes zero sense--even when s/he explains their reasoning (if you can call it an explanation) I know the killer winds up being a tad on the paranoid side, but even paranoidal killers have a certain logic. The logic may make sense only to them, but there is usually a credible logic once you look at things from their point of view. Here, the killer says they had to kill the first man because "he knew too much." There is no evidence whatsoever that the victim knew anything at all about the secrets our killer is hiding or that the killer found them anywhere that might lead them to believe the man had discovered anything. The man had been in the library exactly one time and that was the morning he got killed. When exactly was he supposed to have found out what he "knew"?? The second murder makes even less sense. You kill somebody that knew who this unnamed person was so that someone else will be blamed for both deaths??? And the person you have all lined up for the frame-up has zero reason to kill either of them and especially not the second one. I'm sorry, but I'm just not buying what you're selling. I actually do like the lead character but I wish she worked a little more logically. If I hadn't needed this book for challenges, I don't think I would have finished it and I most likely won't pick up another in the series. ★ and 1/2.

First line: An angel was checking out books at the circulation desk, a mermaid was sprawled on the floor in the magazine sections, and a tall gray-haired witch was helping a four-foot werewolf search for a 1976 almanac.

Last lines: "Lead the way. It's a crime I can ignore."