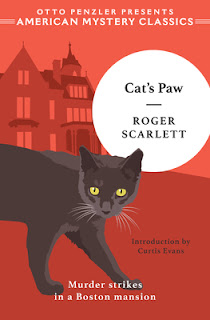 An unconventional country house murder. Scarlett gives us the story in four parts. In the short prologue, we meet Underwood, a lawyer and Inspector Kane's Watson, who gives us a bit of background and tells us how Kane will come into the investigation. The next section, dubbed "The Evidence," shows us exactly what happened at the house of wealthy, elderly bachelor Martin Greenborough in the days leading up to the murder. We meet his extended family--nieces and nephews who are all dependent on Uncle Mart for everything. He holds the purse strings and expressly forbids them from finding other means of support. He doesn't mind doling out the money...on his own terms, of course. We also meet the essential staff--butler and valet--as well as Martin's "companion" (for which, read mistress), Mrs. Warden. We learn about the temperament of the old gentleman and his relations--who is greedy, who is a spendthrift, who has a quick temper, and who has a quick brain. Every interaction will be important to discovering the motive and the murderer.

As often happens in these country house mysteries, the domineering old man gathers his dependents around him for a birthday celebration. He also plans to deliver up a big surprise. A surprise that may well affect their future expectations (under any dispensations of a will). He announces his plans to marry and to meet with his lawyer "tomorrow." Now any good mystery fan knows that Martin is never going to see his lawyer...As a wrap-up to the birthday festivities, the relatives go ahead with a planned fireworks display and when the celebration is over, they all troop up to Uncle Martin's bedroom to find out how he liked them. But he's dead...shot though the temple...and apparently shot from outside the window during the fireworks.

The third section of the book, "The Case," follows Sergeant Moran and Officer McBeath as they take statements and follow up clues. Each time Moran thinks he's found his culprit, new evidence or a new statement comes along to make him rethink everything. By the time he's done, he can't see how he can pinpoint anyone as the murderer. Then Inspector Kane, just returned from a trip, arrives. He hears everything from his friend Underwood and immediately sees a glimmer of the truth. He follows up three clues: the note, the necklace, and the cards. And when he's thoroughly investigated those, he (and the astute reader) knows who done it and why.

I have to say...I was half an astute reader. I knew who did it. I should have known why (I had actually noted certain aspects that would point to it), but didn't really formulate it properly before Kane explained it. Overall, an interesting mystery, though I'm not completely sold on the way Blair & Page chose to set it up. I prefer to have my "Holmes and Watson" center stage for the whole investigation, bringing Kane in for just the last third-ish of the book doesn't suit me as well. But the murder and the motive is definitely well worth the read. ★★★ and 1/2

First line: I had received Kane's wireless message and had sent him my reply.

Last line: "So [redacted] killed him."