Give the Little Corpse a Great Big Hand 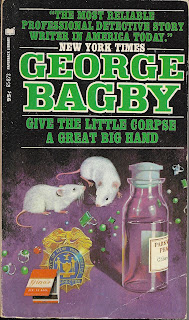 George Bagby is both the pseudonym used by Stein for his most prolific series and the persona employed as the narrator for these Inspector Schmidt mysteries. Little Corpse is the 23rd book in a series of just over 50. In this particular outing, Schmidt and Bagby attend the opening of a brand new night club where an unexpected murder is going to take center stage. A new night club might not feature prominently in the interests of an NYC Inspector, but it's always interesting to see what Little Alfie Jessup is up to and whether this time he might be up to something they can put him away for. Schmidt is also taking a personal interest because the daughter of his good friend, beat cop Halloran, is worried about his daughter.

His daughter Margie sings like an angel and, having recently taken charge of her personal life, has begun singing for money. Her newest gig is as the vocal portion of the entertainment at the brand new Limehouse Club. Neither Halloran nor Schmidt like the idea of Margie in close contact with such a slippery little eel like Alfie--regardless of the fact that she assures them she can handle herself. So, Schmidt, Bagby, and Marie's parents all attend opening night. Margie's act goes well and she seems to have quite the following of well-to-do young people on hand to give her support.

The other big act for the evening is Goldie Gibbs. She's brought onto the stage in a golden mummy case, carried by big and strong, well-oiled (literally) young men, She's wrapped up, mummy-like, in golden wrappings and the audience is prepared to watch her emerge from the case and shed her wrappings. But Goldie's first performance is her last--someone embalmed her with chloroform and she falls to the stage floor in a heap when the mummy case is opened.

But Goldie's murder isn't the biggest story to hit the Limehouse and Broadway--while all those well-to-do young people were busy having dinner, listening to Margie sing, and then being appalled when the dancer died, their homes were quietly relieved of all the valuable jewelry a gang of burglars could find. Inspector Schmidt is convinced that Little Alfie is behind the burglaries, but he can't see how the murder fits in and until he understands the murder he's pretty sure Little Alfie will be safe. Bagby follows the inspector around like a shadow--sees all the same clues and hears all the same witness testimony, but is surprised when Schmidt produces the murderer (and, incidentally recovers all the jewels) in the last chapter.

I have to say--I wasn't shocked at the identity of the murderer....I saw it coming. Though I did get thrown off a bit when he revealed the hiding place of the jewels. I can't tell you why; it would spoil the plot. This was my second adventure with Schmidt and Bagby and I found it almost as enjoyable as The Body in the Basket. There's lots of action and Schmidt does a bit more detecting here, but it lost just a little bit of the sparkle of fun that the previous book had. Perhaps it's because more of the characters are so shady or downright unlikeable (I'm looking at you in particular, Edward L. Harper). I wish we could have had a bit more of the two young medical students who are paying their way through school by being buff , shiny mummy case bearers--they were great fun.  ★★★ and a half for a good plot and a good second visit with Schmidt and Bagby.

First line: If you ask around in Times Square, at Lindy's and at Sardi's and around the Astor lobby, you'll turn up people who may remember it when it was the Limehouse Club.

It must strain your credulity, sir, but it is true. We've been hoping you might understand that we have known such very peculiar people that we have come to expect almost anything of them and we have learned that when they are being peculiar they resent interference. It is best to pretend one had not even noticed it. (Harvey Alden; p. 32)

That was one unchanging characteristic of Jessup's friends. They were just not the sort who could have a good time when there were police around. (152)

Last line: "There should be a law, but there isn't."

Deaths =  2 (one poisoned; one strangled)