The Trouble with Tribbles 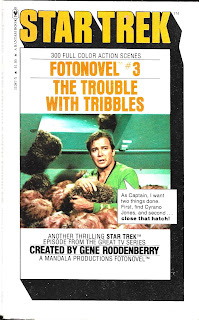 The Trouble With Tribbles (1977) by David Gerrold

The third of twelve fotonovels featuring original Star Trek episodes and published in the 1970s. The books tell the stories in a graphic novel style, using stills for the television show and using comic book balloons for the dialogue. These books were a real treat for fans of the show before VCRs and DVD players allowed us to re-watch episodes whenever we wanted.

Gerrold's story is a fan favorite--who can resist those furry little bundles? It begins with the Enterprise responding to a priority distress call from Space Station K-7 only to find that undersecretary Nilz Baris wants Kirk to provide security for storage containers of grain. The Federation and the Klingons are in competition to prove to the Organians (who administer the peace treaty between the two) that their people are best suited to develop the disputed Sherman's Planet. Baris is convinced the Klingons are out to destroy the Federation's efforts. He also thinks that the means of sabotage will be the cute little animals called tribbles--but he'll find that he has the furry creatures to thank for giving clues to the plot as well as the spy behind all the trouble.

This has always been one of my favorite episodes. I enjoy the humor and I especially enjoy the scenes with Scotty and Chekov in the bar right before the brawl with the Klingons and then Kirk's interrogation of the men when he's trying to discover who threw the first punch. It is always fun to revisit the classic Trek episodes--whether by viewing them or reading this beautifully done fotonovels. ★★★★★

First line: Captain's Log: Stardate 4523.2 Our path is taking us into a quadrant of the galaxy that has been under dispute between the Klingons and the Federation since initial contact.

Last line: Before they went into warp, I transported the whole kit and kaboodle into their engine room where they will be no "tribble" at all!

I remember seeing this episode many years ago. I believe they said the Tribbles were "born pregnant."