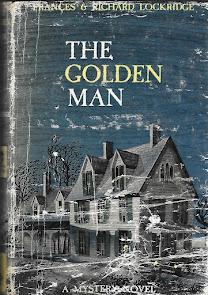 Sandy James is headed to Connecticut to attend her college roommate's wedding. She was supposed to arrive by train on Saturday, but received a telegram from Alice Wood which said:

Darling, could you possibly make it Friday instead? it will work out much better.

So, Sandy gets on the train for Stamford, only to find out mid-journey that the train doesn't stop there on Fridays. Knowing Alice as she does, she's not surprised that her friend forgot about the train's schedule changes. She prepares to get off at the next stop and wonders whether anyone will meet her.

She's met by a man who introduces himself as Alice's brother, Barclay, and escorts her to a waiting car--where she's the last man she ever expected to see again. She's walked into a trap, but can't understand what the men want. And why would Alice's brother be helping her captor? It's possible the "Golden Man" as he was known in their younger days is looking for more money from her father. But she senses that there is more to it than that. And she's very afraid. She's even more afraid when she's forced into a farmhouse where a huge, strong woman and her even bigger and stronger son wait to serve as her jailers. Aaron Pruitt is an ex-con who hurt and nearly killed a fifteen year old girl just because he enjoyed it. And there are hints of what Aaron would like to do to her if the "Golden Man" will just give him the green light. If she doesn't behave herself, the red light will definitely be changing...

It winds up that the "Barclay" who met her at the station is an imposter with an agenda of his own. And the real Barclay Wood manages to figure out where the missing wedding guest is being held, but will he be able to rescue her in time?

I have to say, I'm not a huge fan of the Lockridges' suspense-oriented books. I much prefer the lighthearted mysteries. And this one is dark on top of the suspense. The looming terror of what Aaron did to that fifteen-year old girl and what he would do to Sandy if given half a chance just really isn't the vibe I look for when I settle down with a Lockridge mystery. On top of that, the romance is even more accelerated than usual. One night as captives--and half the time Sandy is out cold from knock-out drops and she & Barclay are running around in the dark, can't see each other very well, and can't really talk to one another for fear of being discovered. When exactly was there time to fall in love? The other disappointment is that while most of the action takes place in Heimrich country, we get to see none of the familiar faces. Familiar places are mentioned, but Heimrich and Forniss and Crowley must all be on vacation.

There. I've gotten the quibbles out of the way. The suspense plot is decent. While there isn't much of a mystery--we know immediately who the bad guy is--his plan has a certain logic to it and might have worked except...well, I can't tell you why because that would spoil the only bit of mystery there is. The best part of the story is watching the how the plot unravels and seeing the bad guys get their just deserts in the end. ★★★

First line: The conductor looked down at her and shook his head slowly, sadly, with the forbearance of one much tried.

Last line: And this, for some reason, struck them both as a very funny thing for him to say.

Deaths = 4 (one auto accident; two shot; one froze to death)