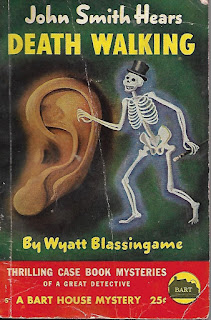 A collection of short stories featuring private detective John Smith and to varying extent his newspaper reporter wife, Marion, and his African American servant, Bushelmouth (what a name). Smith is a hard-drinking, police special-toting, little 'tec. Yes, little. Mention is often made that the reason the bad guys can't kill him is he's too small a target. And...he has super-human hearing (thus the title). For about ten years he was blind from an altercation with a bank robber...until a new surgery was able to restore his sight. During his period of blindness, he (like Baynard Kendrick's Duncan Maclain) developed his other senses to peak performance. He still hears better than anyone else.

The first two selections "The Master of Murder" and "The War Makers" are intertwined. They feature a master criminal who is intent on gaining power. He uses blackmail to get hold of high-ranking officials and he tries to bend Smith to his will as well. Or if he can't, he will arrange for the detective's downfall...or worse. The Master of Murder first tries to frame Smith for a murder that happens right in front of the detective--and seemingly no one else could have committed. But Smith is too clever and figures out how the trick was done. In the end, it seems that the crook has the upper hand, but Bushelmouth, an ex-boxer, comes to the rescue and bops the man a good one before he can drill a hole in our hero.

"John Smith--Graveyard Detective" is the closest thing we get to a real mystery. Old Philip de Gault asks Smith to investigate the whispering voice which assures the old man that he's going to die. De Gault doesn't believe in ghosts, though the voice sounds exactly like his uncle Claude Lorraine who died 35 years ago. He just wants Smith to find out who is threatening him and how the voice can come out of nowhere. But before Smith can even get started, De Gualt is found dead in his room--with no mark on him and no sign of how he died. An investigation into the family's past and a cemetery caretaker's knowledge of New Orleans history, helps Smith get to the bottom of it all.

"Retained by a Corpse": a dying man bursts into Smith's house and begs him to find out who killed him and to protect his wife and children. We wind up with another master plot (this time involving Germans), another shootout or two, and Bushelmouth gets another chance to show off his prize-fighting knock-out punch.

"The Corpse Fights Back": The rumors of John Smith's death have been greatly exaggerated. While he and Marion are away on vacation, a man's body is found in the burnt-out remains of their other car. Everyone--including Bushelmouth--believes Smith to be dead, so when he and Marion show up a bit early from vacation, there is much consternation. And then someone tries to kill Smith again....Now he's got to find out who was killed in his place and why, before that someone succeeds in reducing the world's Smith population by one.

"Death With a Thousand Faces": Instead of the master criminal, this time we have an almost Dick Tracy-like villain--a man with super-strength who can change his appearance almost at will. And somehow this villain who could do so many other villainous things decides to answer lonelyhearts ads and con women out of their money. Honestly, he could have used his talents to be a master criminal...of course, Smith would still have foiled his plans.

This edition of Blassingame's stories has a lovely cover. And I do like these little Bart House books. If only the stories were as lovely. I mean, they're not half-bad as pulp action tales go--lots of death, a super-criminal or two, a hero that bullets always seem to just graze (no matter how close the villain seems to be) and who has extraordinary senses. There's even a couple of stories with a hint of actual detective work going on ("John Smith--Graveyard Detective" [more] and "The Master of Murder" & "The Corpse Fights Back" [less]). But the cliches are thick and heavy and so are the racial slurs. Bushelmouth is referred to by all the usual negative terms except for the n-word and is depicted as too fond of corn whiskey. There is a brief moment where Smith thinks Bushelmouth has been killed and he displays a real affection for the man, but it doesn't last. A low ★★ and 1/2.

Last line: So I gave him some money and a vacation.