Hans Brinker or The Silver Skates 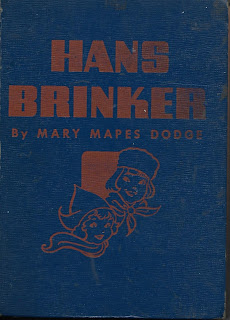 Hans Brinker or The Silver Skates (1865) by Mary Mapes Dodge

Hans Brinker is a classic children's story set in Holland and focusing on the poor, but honorable Brinker family. Hans, at 15 years old, and his little sister Gretel, 12, have few friends and miss out on much schooling because they must work to help their mother support their family. Mr. Brinker was a worker on the dykes and made a decent living until he suffered a head injury from a fall from the dyke ten years ago. Since that time, he never speaks and mostly just stares into space. But when he grows irritable and causes physical damage to their home and scares their mother, Hans decides that something must be done.

The two children wanted more than anything to be able to skate in the great race down the frozen canals. There would be two winners--a boy and a girl--and the prize would a set of beautiful silver skates. But the Brinkers cannot afford good skates and only have homemade skates made of sharpened wood and tied to their boots. Two kind-hearted children arrange for both Gretel and Hans to have fine, new skates. But proud Hans insists on working for the money and carves wooden necklaces. Peter, one of the kind-hearted children, suggests to his family that Hans could do the carving which they have wanted done on the front door frame. And Hans sees this as a way to earn money for a doctor.

But with his father's recent behavior, he has to approach the doctor before he has earned the money and sells his new skates to pay the doctor. Fortunately, Dr. Boekman takes a liking to Hans and offers his services for free. He performs a risky operation and Mr. Brinker regains his speech. Memories follow--but more slowly. The family are anxious for all of his memories to return because there are some mysteries to clear up.

I never realized that Hans Brinker had--in addition to a charming children's story--a mystery at the heart of it. Two mysteries, in fact. First, there is the missing savings of the Brinker family. A large sum of money--all of their savings--went missing on the same night that Mr. Brinker had his fall from the dyke. The second mystery involves Dr. Boekman's missing son. The answers to both mysteries are locked in Mr. Brinker's brain and it isn't until Hans convinces Dr. Boekman to treat his father that the mysteries will be solved.

This was an enjoyable, uplifting children's story that focuses on family, loyalty, and friendship. It, of course, has a happy ending though {SPOILER} I was surprised to find that Hans isn't the one who wins the silver skates. Since he's in the title and is our primary protagonist, I really expected him to be the winner. But the ending is most satisfactory anyway--Hans's sense of loyalty prompts him to help a friend win and Gretel does wind up the winner of the girls' race. I appreciated the fact that Dodge tells us what happened to all of our primary characters in the years that followed. She also manages to relay a great amount of information gleaned in researches about the Netherlands without making the reader feel like the recipient of info dumps. ★★★★

First line: On a bright December morning long ago, two thinly clad children were kneeling upon the bank of a frozen canal in Holland.

There is an Angel called Charity who would often save our hearts a great deal of trouble if we would but let her in. (p. 150)

Last line: But lest you forget a tiny form trembling and sobbing on the mound before the Brinker cottage: they will never weary telling of the darling girl who won The Silver Skates.

Deaths = 2 (one natural; one poisoned)