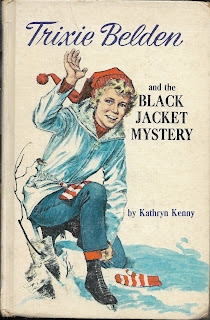 Trixie and the Bob-Whites are getting ready to hold an ice carnival on the Wheelers' lake. Trixie and Honey's pen pals in Mexico have been through an earthquake. The disaster destroyed their school library and they don't know how the books will ever be replaced. So, Trixie comes up with the idea of the carnival to raise money and seek book donations. You'd think she'd be too busy to get mixed up in a mystery...but not our Trixie.

Regan, the Wheelers' groom, is acting oddly. Trixie overhears him asking her mom for advice for some sort of situation and then later she accidently sees a paper in the tack room that indicates some sort of legal trouble. Regan has to go into New York City on some sort of business and the next thing the Bob-Whites know there is a new boy at school. A boy who apparently came from the city and who wears a black leather jacket, cowboy boots, and a peaked black cap. He spends the lunch hour talking about how he and his "club" deal with people.

He struck a fist into the palm of his other hand forcefully. "Pow!"

Despite the Bob-Whites making efforts to be friendly, he remains stand-offish and even a bit rude. Trixie speculates that his club must really have been a gang and when Honey's watch comes up missing and is found sold to a local store, she suspects Dan of being responsible. Then the clubhouse is broken into and their petty cash stolen. But there are conflicting clues--while there are cowboy bootprints in the dirt floor of the clubhouse, they look to be too big for Dan's foot. But who else could it be? No one else in Sleepyside wears pointy cowboy boots. It's a mystery Trixie just has to solve.

This story represents both a thing I like least about Trixie and something I like best about her and the Bob-Whites. One of the most annoying things about the girl who wants to grow up and have her own detective agency is the way she jumps to conclusions. Jumps, did I say? How about takes a running, flying leap at them. For a girl who has a heart big enough to want to host an ice carnival to to raise money to replace books destroyed in an earthquake, she closes that heart up right quick the minute she sees Dan Mangan in his black jacket and cowboy boots. She decides on little evidence that he must have "stolen" (picked up out of the snow) Honey's watch and then broken into the Bob-Whites' clubhouse. And even when the evidence found proves it couldn't have been him--the footprints are too big and the boots which made the prints are the wrong color--she immediately jumps right back on the "Dan's a bad boy" band wagon the next chance she gets.

But as mentioned, she does have a big heart. And I love the way she and the others are always finding ways to those in need. Having the ice carnival for their pen pals in Mexico who need to replace their school library books, is a wonderful idea. It was great fun to watch the show come together. I just wish Trixie could be a little bit more open to people right in front of her. Yes, Dan is acting rude. But both Honey and Mart notice that he looks more scared than tough. I'm glad that Trixie did come round to seeing that Dan just really needed the right kind of friends. ★★★ and 1/2

First line: "Bobby! If you don't hold still, I'll never have you ready in time to catch your bus!"

Last line: To which Mr. Maypenny nodded and said, "Amen."