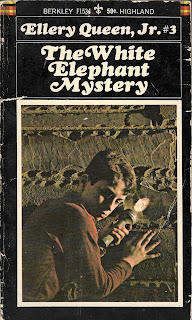 This is the sixth in the Ellery Queen, Jr. series. It features the lead amateur sleuth Djuna, appearing with his friend Tommy Williams. The boys have just found out that the circus is coming to town and are trying figure out how to earn enough money for the entrance fee when Mr. Boots comes along and offers them free passes good for every day the circus is in the area. Boots had been good friends with previous owner of the circus, Mr. Grant, and knows Grant's son--who has recently taken over after his father's death.

Djuna's old friends Socker, the newspaper reporter, and Cannonball, the state trooper, are at the entrance gate and Djuna is asked to keep his eyes peeled for grifters--con men who work as pickpockets, quick-change men (with money), and other shady dealings among the crowds. If they spot any, they're to let the men know right away--and not do anything themselves. But when the boys' new friend Spitfire, the high-flying trapeze artist, has a terrible fall, Djuna can't keep out of it. He's sure there's more going on than just grifters. Someone is out to hurt the circus performers who were closest to old Mr. Grant. He just doesn't know who or why. He does know that it has something to do with "the white elephant" which Spitfire urgently told Djuna about just before being taken to the hospital. Can Djuna and Tommy figure out what it means before someone else gets hurt...or worse?

This is another fun adventure in the Queen, Jr. series. Djuna is a well-drawn, intelligent, independent young boy who maybe takes a few chances that perhaps he shouldn't (but where would the drama be if he didn't?). He's very good at picking up on clues that the adults don't notice. His dog, Champ, isn't as prominent as in other stories, but Champ does help provide the vital clue that leads Djuna to the solution of the mystery. It's all great fun in a perfect setting for kids of all ages--the circus!  ★★★ and 1/2.

First line: The boy named Djuna stopped so suddenly that his little black Scotty, Champ, who was trotting just behind him, and his friend, Tommy Williams, who was running right behind Champ, all got all tangled up together as Djuna pointed at a red and yellow poster on a fence and shouted, "Jiminy crimps!"

Last line: And everybody, while Socker marked time, joined in the chant that the circus men always sing as they drive the tent pegs into the ground: "Ah, heebie, hebby, hobby, holey, go-long!"