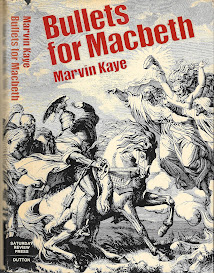 Bullets for Macbeth (1976) by Marvin Kaye

Hilary Quayle and her assistant Gene, of Hilary, Ultd., are asked by an old friend of Hilary's to manage the publicity for an elaborate production of Macbeth scheduled to open at Madison Square Garden's Felt Forum. It's going to be quite a job--especially since the director and producer have waited until practically the last minute to settle on publicity. But it becomes even more of a job when Hilary and Gene wind up looking for a present-day murderer as well as the identity of Banquo's third murderer.

Shakespearean scholars had long debated the latter and it seems like a long-shot that our publicity folks will solve the puzzle--but they have a more pressing reason do so than all those scholars did. Michael Godwin (the old friend and director of the production) had come up with a new theory on who the third murderer was and planned to reveal his choice during the production. He claimed that there was textual evidence in the play itself that supported his theory. He kept his plan secret from everyone in the company--practicing in secret with the actor who was to play the part. When Michael Godwin (the old friend and director) is shot and killed during the dress rehearsal by what appears to have been the third murderer, solving the identity of Shakespeare's third murdered will most likely reveal who was responsible for Michael's death. Hilary and Gene's friend, Inspector Betterman of the NYPD, think their idea is so much eyewash, especially since the man who owned the gun has taken a powder. But then the police's main suspect is stabbed and it looks like the amateurs may have a good idea after all. Will they be able to pinpoint Banquo's murderer in time to prevent more deaths?

I have mixed feelings about this one. On the plus side, I enjoyed the way Kaye works the mystery of Shakespeare's third murderer into the present day murder. Since I'm not a Shakespearean scholar, I don't know if the identity in the play is still in hot debate or not, but I do think Kaye (through Hilary) makes a compelling case for the choice made here. And for what Kaye wanted to do with plot, it dovetails very nicely. However, taking the present-day murder on its own merits, I don't find the chosen culprit satisfying. I believe there was a much more interesting solution--one that could have worked with the clues we were given and it would have been far more satisfying to me.

Another plus was our narrator, Gene. I enjoyed viewing events through his eyes and it was really nice to see the character who is set up as the Watson to our lead detective (Hilary) actually solve the mystery himself. She manages to solve the Shakespearean question--independently, but Gene follows the modern-day clues and has the entire wrap-up scene entirely to himself. This was especially satisfying to me because, quite frankly, Hilary is not my favorite person in Kaye's world. She's alternately nasty and nice to Gene--who has a thing for her and I can't for the life of me figure out why. She constantly accuses him of certain behaviors and then gives him zero chance to explain himself. We've watched him the entire time, so we know who side we're on. I thoroughly enjoyed watching him solve the mystery without her. I think part of the problem is that Kaye doesn't write women well. He has great difficulty representing them whenever they are not being b-----s, so giving them authentic emotions and behaviors beyond the negative seems to be out of his league.

Overall--a nicely done mystery, especially for those who like their mysteries with a literary bent. I would have given higher marks if the solution (which is solid, don't get me wrong) had been more satisfying to me personally and if Kaye had more range when portraying female characters. ★★★

Last line: Privately, I wondered how the hell I was going to break my date with Pat Lowe without hurting her feelings.