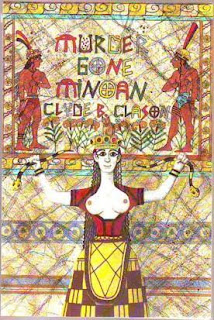 Professor Theocritus Lucius Westborough is invited to an island off the coast of California to track down the thief who has stolen a priceless statue. He'll find himself faced with murders as well before he determines who the thief is.

Alexis Paphagloss, a department store magnate, is the self-styled "Minos" of his very own island palace named Knossos. Like the tyrant king of mythology, Paphagloss rules his family and the island with an iron hand and brooks no disobedience. He dislikes his wife--because she married him for his money and not because she thinks he's wonderful. He wants to arrange a marriage for his daughter with the son of another department store tycoon--to expand the empire. Just like in days of yore. He's invited said tycoon and son to the island in an effort to cement a business deal that will be most advantageous to the Paphagloss side of the bargain.

Also on the island is his step-son, an ardent archeologist who is digging up relics from California's ancient past--not nearly as interesting to Paphagloss. But the modern Minos has dug up a Minoan scholar to come expressly to examine the his Minoan artifacts and especially his priceless statue of the Minoan snake goddess. You see, Paphagloss has a thing for Minoan culture and he even has an artist creating "authentic" Minoan frescoes on the walls of his palace. He's pleased with the art, but not with the obvious attraction between the artist and his daughter. His mood doesn't get any better when his prize possession, a priceless statue of the Minoan snake goddess, is stolen while the scholar has it out of the case for examination.

A few days later, the butler disappears. Some say "the butler did it," but Paphagloss is sure his butler was a loyal, faithful servant and Westborough thinks there's more to the butler's disappearance than meets the eye. When the first body is discovered, he's proved right. But will he discover who done it before more murders and another theft take place?

This was an interesting entry in the Westborough series. It has a very epistolary set-up--beginning with letter exchanges and with intermissions for transcripts of the written statements from the various witnesses each time there's a murder. Clason drops clues in the documents and in conversations so adroitly that I definitely did not spot the important ones which would have told me what the letters Westborough sent (which we didn't get to see...) contained. I also would have known who did it. But Clason kept that secret till the very end...at least from me. Another pleasant puzzler featuring an academic. I can't resist those. ★★★★

First line: Dear Fred: What do you know about Minoan art?

Last line: And presently even the mottled hills faded away.