Murder on the S. S. Rosa 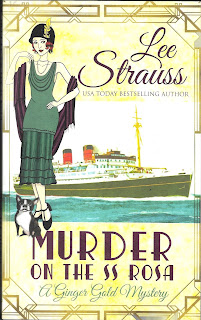 It's 1923 and Ginger Gold is on her way back to England after spending many years in the United States (that's why you won't hear her addressed as Lady Ginger Gold in this adventure). Her father has passed away and she must go back to England to wrap up her estate. Her dear friend, gained when the young woman was nursing her father, Haley Higgins is joining Ginger on the journey. Hayley's mission is to take up studies in London to become a doctor. The young women are traveling aboard the S. S. Rosa whose Captain, Joseph Walsh, was a friend of Ginger's father.

But Captain Walsh is more attentive to Ginger because she's a lovely young woman than because he has any paternal feelings for her and it soon becomes clear that the captain, though married, has a roving eye. Not only does he make Ginger uncomfortable with his attentions, but he also seems to be in hot pursuit of Nancy Guilford, a famous actress who is also on board. Ginger witnesses an altercation between the first officer and the captain and later the chef, who seems to be overly attentive to Mrs. Walsh, is seen casting dark looks the captain's way.

It isn't a major surprise to readers then that the captain is found murdered (this is a murder mystery after all). It is a bit surprising that he's found stuffed into a pickle barrel, having been bashed over the head and then drowned in the briny juice. Ginger was some sort of intelligence worker (shhhh, we don't know that officially) in the war and her investigative nature takes over. At first, Chief Inspector Basil Reed of the Yard, also traveling on the Rosa, isn't terribly keen to have her nosing about, but they wind up making a pretty good team. Ginger also enlists the help of Scout, a young attendant in steerage who minds the pets of passengers (including Ginger's Boston Terrier, Boss) and he provides her with a very good clue.

I enjoyed this earlier adventure with Ginger a bit more than the first one I read (though it was good too). I think perhaps the closed circle of the murder on board ship helped and I certainly think the puzzle is stronger. I definitely didn't expect the solution to turn out quite the way it did. So Strauss did a great job of keeping me mystified. The atmosphere aboard ship was perfect and she manages to effortlessly transport us back to the 1920s. I love a good historical mystery and the Golden Age is one of my favorite periods. ★★★★

First line: In the dismal autumn of 1918 Ginger Gold had vowed she'd never go back to Europe.

Last line: As soon as the chief inspector closed the door behind him, Ginger opened the telegram.

Thanks for the review. 😊 I confess I struggle to make decisions as to whether to pick up a "cozy mystery" with blurb comments like, "a delectable Christie-like read". For more often than not the comparison pertains to reproducing Golden Age vibes concerning setting and characterisation, and not to sharing the Golden Age authors' commitment to constructing a clued-puzzle at the heart of the mystery. So it's encouraging to hear that this title makes an attempt at putting a puzzle into the story.

Yeah, I'm not keen on comparisons to Christie. I try to take those with a grain of salt. This series is nice and light with good atmosphere.