Death in the Tunnel (slightly spoilerish) 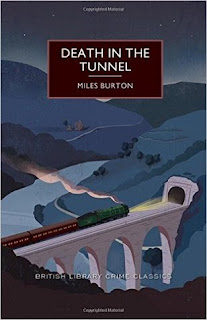 Death in the Tunnel (1936) by Miles Burton (Cecil John Street)

Two elderly men are aboard the train running from Cannon Street to Stourford. When the train arrives at the station after traveling through a long tunnel, one is dead--shot to death in a locked compartment--and one has completely disappeared. The death of Sir Wilfred Saxonby has the surface appearance of suicide. He specifically asked the conductor to keep others out of his first class compartment. The gun found bore the initials W. S. and was positioned exactly where it might have fallen if Saxonby had used it himself. The compartment was locked.

The other gentleman left a first-class compartment shared with two ladies (strangers all) before the train entered the tunnel and apparently evaporated into thin air. The men in railroad buildings at either end of the tunnel swear that nothing, other than the train, either entered or left the tunnel. If Saxonby didn't kill himself (and none of his family or business associates can suggest a reason why he might have), did the man who disappeared have a hand in the death? And how did he get to Saxonby...and where did he go when he was done?

Even when Inspector Arnold learns that mysterious red and green lights in the tunnel caused the engineer to slow the train, he's hard put to figure out what that had to do with the death. The slowed train would have allowed someone to get off or to get on...if there were any way they could have dones so without being seen by the men at either end of the tunnel. Arnold calls upon his friend Desmond Merrion, a wealthy amateur of the Lord Peter Wimsey sort, to lend his imagination to the problem. It winds up being a more involved conjuring trick than Arnold supposes.

I mention Lord Peter Wimsey above. I have to say that I don't quite think Merrion is in Wimsey's league. Some of his ideas are little off-the-wall and I had difficulty following his different permutations of "A" and "B" (his proposed collaborators). Wimsey sometimes comes up with some fanciful-sounding propositions, but there's generally some solid logic underneath. At times, Merrion seems to be trying to come up with the most outlandish explanation possible.

I did like the fact that we mixed the death on a train trope with a "locked room" mystery. Not only is the compartment locked, but there is apparently no way in or out of the tunnel except on the train. It made for an interesting combo and puzzle. However, as soon as one little comment is made while examining the tunnel, I was ahead of Arnold and Merrion in figuring out how access/egress was gained. I had my eye on the main culprit (the brain behind the plot) though I couldn't quite see how they could have played the part they did. Burton explains that well, but I do cry foul on the second figure--there's no way the reader could guess their identity that I can see.

Overall, a fairly interesting puzzle mystery. It's my second venture into Street's work (the first, written under his John Rhode pseudonym) and so far he's given me solid ★★★ and 1/2 books.

First line: The 5.0 p.m. train from Cannon Street runs fast as far as Stourford, where it is due at 6.7.

But, do you know, I'm never quite easy in my mind about locked doors especially when they are railway carriage doors. You know what a simple thing the key of these locks is. (Inspector Arnold; p. 13)

It seems to me that very remarkable things happen on this line of yours....It's impossible for anybody to get in or out of that tunnel without being seen. Yet, on Thursday evening, people seem to have gone in and out at their own sweet will. (Arnold; p. 67)

Last line: They were duly hanged.