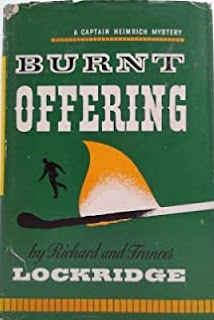 Captain M. L. Heimrich of the New York State Police is visiting his niece and her husband in the town of Van Brunt. Marian and John Alden are fairly new to the town and have taken up their civic duty by attending public hearings. The captain joins them for an evening of "Clerk'llread" and "Dopted" as the council makes their way through various matters. Just as the meeting has come to the most heated topic--the changing of ordinances to allow small, cheap parcels of land to go up for sale as building lots, the crowd notices a sudden glow in the sky--fire! It's not a surprise that there is a fire--after all it's been a very hot, dry summer. What is a major surprise is that it is the firehouse itself that is ablaze. By the time fire trucks reach Van Brunt from surrounding towns there isn't much left of the firehouse or its two fire engines.

Early next morning, Asa Purvis wakes up in the backroom of his family's garage--which is just across the road from the burned-out building--and notices the station wagon of Orville Phipps, chairman of the town council, parked so it blocked the gas pumps out front. Asa decides that this is odd and wonders if Phipps decided to investigate the remains of the fire. So, Asa investigates...and finds remains, but not just of the fire.

Since Heimrich is on the spot, he's asked to take a look. Despite the general feeling that Phipps must have gone into the building and got caught in the fire, the captain believes that something doesn't quite fit. For one thing, there's too much left of Phipps. As hot as the fire was and as much as it burned, there shouldn't be teeth to send to to the dentist and enough of the body left for the police medical examiner to determine whether death was truly due to fire. Spoiler alert--it wasn't. So, now Heimrich has a murder on his hands and a town full of suspects. Because Orville Phipps was not the most popular man in Van Brunt.

Enjoyable mystery with Heimrich once again looking for a character to fit the crime. The person with the greatest motive (monetarily speaking) would seem to be Mrs. Susan Faye--a young, widowed mother who could really use the $10,000 her cousin has left her. Heimrich tries to be impartial (he finds himself attracted to her) when the investigation begins and, fortunately, suspicion shifts when a mysterious man waylays her young son for an hour and sends him home with a message, "See how easy it is." Apparently someone thinks Susan knows more than she's told about the events the night of the fire. And that someone threatens to kidnap Michael for real if she doesn't keep her mouth shut.

The motive for the murder is perhaps a little on the light side--but people do sometimes get worked up over the most seemingly insignificant things. Overall, a good comfortable read by two of my favorite comfy-read authors. ★★★★

First line: The man who sat at the end of the long table and faced assorted taxpayers of the Town of Van Brunt, County of Putnam, was by no means a large man or a young man or a handsome man.

Last lines: He heard her laugh softly. But not as if she thought his an especially comical name.