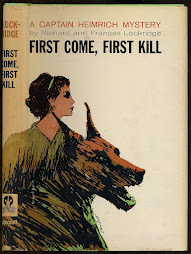 For once, Captain Heimrich doesn't have to go find murder, murder comes to him. Well, at least it comes to his driveway. You wouldn't expect a killer to choose to shoot their victim on the doorstep of a State Police captain, but someone near Van Brunt, NY does. Heimrich's wife, Susan, is in their front yard when Colonel, their Great Dane, barks to announce a visitor. A very old man comes stumbling up the drive and falls over, dead, before the dog can reach him. It doesn't take long to discover that the man has been shot nor that he is a man known as "Old Tom" who often did odd jobs for various folks around Van Brunt. But nobody really knows who Old Tom was or were he came from.

Fortunately, for the detective, Old Tom's fingerprints are on file...but not as an old jailbird. The corpse in Heimrich's driveway is T. (for Thomas) Lyman Mitchell, a missing New York Supreme Court justice. Mitchell disappeared from Tonaganda six years ago--leaving behind a wife and daughter and a large estate that no one could touch since the man had not been proved deceased. That's not a problem now. The former Mrs. Mitchell expects to scoop the pot under an old will--but an eleventh hour holograph will turns up, leaving the judge's material possessions to his daughter. Had someone in the family gotten impatient for the estate to be handed over? And, if so, how did they know where to find Mitchell?

Of course, family members are the only suspects. There are rumors that the judge had ties to racketeers and when things got too hot he decided to disappear. But granted that there's any truth in rumor, the question remains...how did they know where Mitchell was? If Heimrich can't answer that question, then he needs to consider whether Mitchell was killed, not as missing Justice Mitchell, but as Old Tom. In his wanderings from place to place in search of odd jobs is it possible that he wandered into something he shouldn't have? Maybe saw something that someone would prefer to keep quiet?

I read most of the Heimrich series long ago and far away, before My Reader's Block was gleam in the internet's eye. Generally speaking, if it's been long enough since my last reading, I can reread mysteries and quite often be misled by red herrings all over again. Not so with this one. I knew who and what and why pretty much from the point when who showed up in the story. Fortunately, that didn't deduct much from the enjoyment quota. It was still very interesting to watch Heimrich and Sergeant Forniss at work and to wonder what clue was going to set the wheels in motion towards the grand finale. It was also fun to watch Trooper Crowley redeem himself after being knocked out by Colonel in the previous book. These books are pure comfort reads for me and I enjoy them every time. ★★★★

First line: From the terrace, Susan Heimrich could not see the bus, but she could hear the screech of brakes as it stopped--hear the brakes go on and, as always, know a moment of trepidation.

Last line: But one cannot help having an orderly mind.