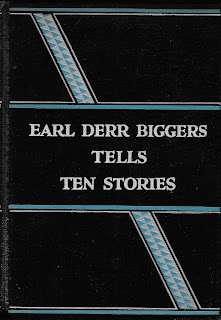 Before writing his successful mystery novels about Honolulu detective Charlie Chan, Earl Derr Biggers wrote short stories that appeared in magazines such as The Saturday Evening Post. Several of these were turned into screenplays for movies in the 1920s and 30s. Few of them have any mysterious elements--they are charming slices of life from everywhere from Southern California to the East Coast to the south seas. Pleasant little stories--unfortunately not quite what I though I was getting when I picked the book up originally. ★★★

"Moonlight at the Crossroads": While on a South Seas tour, a selfish actress is about to ruin the lives of her fellow actors. What can anyone do to influence the choices made in the moonlight? A couple of actors know just how to play the scene.

Odd turn, isn't it, that so notably selfish a woman should be the instrument of so much happiness?

"Selling Miss Minerva": A crackerjack car salesman in California is offered a salary increase to come East and give his selling technique a real workout--on Miss Minerva Bluebottle of Stonefield, Massachussets. If Billy Anderson can sell a car to Miss Minerva, then he really is the greatest salesman in the world...

"The Heart of the Loaf": Bobby Dana comes back home to Mayfield after five years of adventures to paint a portrait of one of the town's leading men (now deceased), helps create a feud and resolve it all in one go, and trots off the field with the heart of...a certain young lady.

"Possessions": More of Bob Dana and his new wife...and learning what it means to have possessions.

"The Dollar Chasers": A parody of the detective story involving the theft of one dollar. But it's a special dollar--it's the first (silver) dollar that Jim Batchelor ever earned and he swears it's his lucky charm. If Bill Hammond, reporter, can find the dollar, he'll earn an editor's position...and a wife.

"Idle Hands": Jim Alden has retired and been put out to pasture. If he doesn't find something to do with himself soon, he just knows he's going to be pushing up daisies. So, he buys himself a half interest in a garage...

"The Girl Who Paid Dividends": Peggy Malone is a successful chorus girl with a pretty face and a big heart. She finds herself supporting her husband and her deadbeat dad and brother. Her husband finally decides to pull his weight and cut Peggy loose from her other responsibilities.

"A Letter to Australia": All about a letter from one best friend to another...that never gets written.

"Nina & the Blemish": A spoiled rich girl meets the only man who might be her match...but he doesn't seem interested.

"Broadway Broke": Nellie Wayne is a retired theatrical star whose family needs help. She saves the day by selling her plays to a film producer.

Last line (last story): The taxi swung suddenly into the tunneled drive at the south end of the station--the long dim tunnel where the lights of Long Acre were just another memory.

I can't tell you how exciting it was for me to see the title of your post! I really like Biggers' writing, and will look out for these stories. A few years back I read all the Charlie Chan books, and three others - Fifty Candles, The Agony Column, and Seven Keys to Baldpate. It makes me so happy to see someone reading these old books. I have a big smile on my face. Thank you!

Glad to give you a smile, Nan!