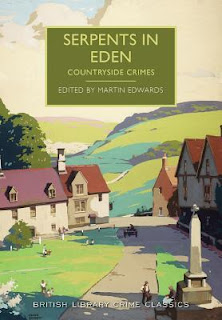 The British Library Crime Classics series and Martin Edwards brings us a short story collection all about trouble in the paradise of the British countryside. We have murderers, swindlers, and mischief-makers galore--all proving Holmes's observation in "The Copper Beeches":

The lowest and vilest alleys in London do not present a more dreadful record of sin than does the smiling and beautiful countryside....Think of the deeds of hellish cruelty, the hidden wickedness which may go on, year in, year out, in such places, and none the wiser.

Holmes knew what he was talking about. The pleasant gardens of the manor house, the fertile fields, the quiet wooded valleys...all prove to be a dangerous place for the poor victims found in the stories within. I'm always amazed at the little-known stories that find their way into these collections. I'm also pleased  when I realize that some of these lost gems have already been found by me in random vintage collections that I've picked up in my book-hunting journeys. An interesting mix of stories.  ★★★★

"The Black Doctor" by Sir Arthur Conan Doyle: A surprise witness saves a hotheaded young man from a verdict of guilty in a murder case.

"The Fad of the Fisherman" by G. K. Chesterton: Sir Isaac Hook has a fad for getting up earlier than anybody else ever did to go fishing. He also has a thing for a spot of blackmail. Somebody puts an end to his two little hobbies...permanently.

"The Genuine Tabard" by E. C. Bentley: Mrs. Langley tells Philip Trent about her husband's prized tabard. When Trent hears about how it was obtained, he's sure there's something fishy about the set-up.

"The Gylston Slander" by Herbert Jenkins: It's a case of poison pen notes in the village of Glyston.  Sage must find out who hates the vicar's daughter and/or the curate enough to write such vicious notes about them and spread lies throughout the community.

"The Long Barrow" by H. C. Bailey: A woman says that she's being followed everywhere and that someone is leaving dead animals around. Reggie Fortune agrees that something isn't right. Could it have anything to do with the excavations at an ancient archeology site?

"The Naturalist at Law" by R. Austin Freeman: Dr. Thorndyke investigates a drowning in a ditch (which, here is like 4 - 4 1/2 feet deep) . It seems a simple, straightforward suicide, Thorndyke immediately spots something that makes him wonder.

"A Proper Mystery" by Margery Allingham: The local constable is sure he knows who let Mr. Light's cows out of the field to trample the Garden Field's entries in the annual garden show. But is he missing something?

"Direct Evidence" by Anthony Berkeley: All the evidence points to James Meadows as the killer of Mrs. Greyling. After all half the village witnessed him pull up in his car, argue with her (quite loudly), and then pull out a gun and shoot her. His sister swears he didn't do it...and after a while Roger Sherringham believes her. But can he get around the direct evidence of so many eyes?

"Inquest" by Leonora Wodehouse: Another murder in the country house. Or is it suicide? But wait...maybe it was murder after all? The nasty John Hentish is dead from an overdose of morphia. Did he take too much? Did his nephew do him in thinking he was the heir?

"The Scarecrow" by Ethel Lina White: White doing what White does--an isolated house and an escaped psychopath and the girl he attacked three years earlier.

"Clue in the Mustard" by Leo Bruce: Sergeant Beef investigates the murder of an elderly spinster. Mrs. Craig's death might have passed off as a natural one if it hadn't been for a helping of Beef and mustard.

"Our Pageant" by Gladys Mitchell: Who killed the lead Morris Dancer in the middle of the village pageant?

Last line (last story): It did seem rather a pity. and the silver collection was negligible, but that was only what we'd expected.

Deaths = 8 (one natural; two shot; one strangled; one drowned; one poisoned; one "natural" [heart attack induced by extreme heat]; one stabbed)