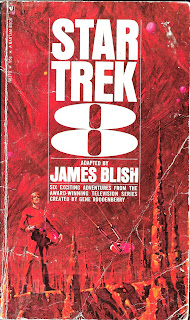 One of a series of collections of classic Star Trek episodes, adapted as short stories by James Blish. The odd thing about these collections--that I didn't notice when I first got them back in the 1980s--is that the episodes included are random. It would seem to me that it would have made more sense to put the stories together in production order and having volumes of season one and so on. Instead, Blish gives us two stories from each of the seasons. This volume includes the much maligned "Spock's Brain" (though I happen to think "And the Children Shall Lead" is much worse), "The Enemy Within," "Cat's Paw," "Where No Man Has Gone Before," "Wolf in the Fold," and "For the World Is Hollow & I Have Touched the Sky." We get stories where Spock's brain is stolen by a civilization that needs it to "control" their life support systems, Captain Kirk is split into good and evil version's of himself, the Enterprise crew finds themselves at the mercy of a magical pair of aliens who live in a castle, Kirk's original first officer receives god-like powers and quickly begins to abuse them, a serial killer stalks the women of Argelius and Scotty is set up as chief suspect, and McCoy finds himself with a rare disease and a hankering to settle down for what remains of his life.

It was nice to revisit episodes from my favorite TV show--even if all the stories aren't the absolute best of Trek.  ★★★ for the entire collection.

First line (1st story): The curiously elegant spaceship depicted on the Enterprise screen had failed to respond to any hailing frequency or to approved interstellar symbols.