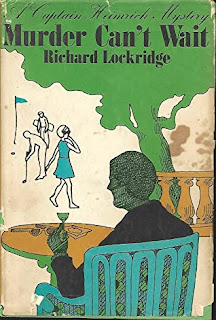 Lieutenant Nathan Shapiro is out of his element and off to the country and into the stomping grounds of Captain M. L. Heimrich. The city police have gotten a "squeal" that mobsters are moving in on the football team at Dyckman University in an attempt to set up a point-shaving scheme. Shapiro is sent to meet up with Stuart Fleming, former Dyckman football star, who claims to have information. But when Shapiro arrives at the State Police Barracks to ask directions to Fleming's house, Heimrich tells him that he's too late. Sometime in the early morning hours somebody shot Fleming five times just to make sure that the job got done.

There is the obvious idea that those mobsters with the point-shaving scheme must have gotten wind of Fleming's planned interference and the possibility of police interest. And that these mobsters must have decided to shut Fleming up permanently. But there's also the fact that a substantial trust fund will revert to his brother upon his death. And the fact that someone signed into a skiing lodge under Fleming's name and Stuart was trying to find out who that was. There's also the fact that the local golf pro shows up at Fleming's house late in the morning after the murder, threatening to bash the "so-and-so's" teeth in--because he thinks the "so-and-so" has been trying to steal his wife. Did he really not know Fleming was dead? Or is he putting on a show so he won't be suspected? Maybe the answer isn't quite as obvious as it appears.

Shapiro reminds me of Michael Faye's Great Dane Colonel. He appears to everyone he meets that he's perpetually sad or depressed. He's sure that the department has made a mistake somewhere thinking that a cop who's just "guy who's good with a gun" is some sort of detective. And the sort of detective who should be promoted to lieutenant. Never mind that he has a knack for solving these murders where he believes he's out of his depth. Here, he winds up working with Heimrich and Sergeant Forniss and the three make a good team--each discovering an important clue that leads to the discovery of the killer.

Another enjoyable, comfy reread. It had been long enough since the first time that I had forgotten who did it and was pleasantly in the dark until Shapiro interviewed a certain private detective. It was also fun to see Professor Emeritus Walter Brinkley again--if only briefly. ★★★★

First line: Nathan Shajpiro drove an unassuming police car north on the Saw Mill River Parkway and was certain that no good would come of it.

When you meet a man--a man you are going, for however brief a time, to work with--you lay a little trail of facts about your self, a trail for the man to follow, if he wants to follow. It is easier to work with other men if they know something about you, and you something about them. What you know does not need to be important; little things will do. (p. 14)

Forniss shrugged heavy shoulders. He said that if you jogged a memory, there was no telling what would fall out of it. Or what the jogged siftings would be worth. (p. 65)

Last line: And afterward he was going to take Rose to the movies.