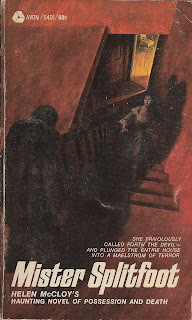 In the middle of a snowstorm, in an old house in the Catskill mountains, Lucinda Swayne decides she's going to summon up Mister Splitfoot...the devil. Not for real, of course, but the teenage girl and her friend Vanya plan a diabolical practical joke to scare her father and stepmother. Lucinda knows there's something odd about the house--there's that room at the top of the stairs that's always locked and no one talks about. Haunted, of course. So, there's a nice atmosphere for conjuring demons. Vanya plans to hide in a  place where "they may search...but they won't find me." And he'll produce ghostly knocking to indicate that Mister Splitfoot has arrived. But when the family, friends, and a couple of unexpected guests are gathered in the dining room and the eerie knocking begins, she doesn't realize that it's not Vanya making the noise. He calls just after the manifestation to tell her wasn't able to make it. So, who...or what made the noise?

Earlier that evening, Dr. Basil Willing and his wife were driving through the snowstorm in an attempt to reach the ski lodge where they had reservations. The car dies just a short distance from Crow's Flight, where the Swayne's make their home, and Gisela injures her foot on the way to the house. Frank and Serena take the stranded couple in for the night and add them to their somewhat crowded guest list. Over dinner, when the question arises as to why the Willings must sleep in the living room rather than the empty room at the top of the stairs, David Crowe (who has rented the house to the Swayne's) reveals that several unexplained deaths have occurred in that room--and since the last Crowe died there, the room has been kept locked.

After the strange knocking occurs and Lucinda faints dead away after Vanya's phone call and everyone but the men in the house have gone to bed, Willing, an eminent psychologist, suggests that the room should be opened and proved safe to normalize Lucinda's feelings. That suggestion morphs into a drawing of lots to see which of the men will spend the night in the "haunted room." The lot falls to David Crowe and armed with a book to keep him awake and a bell to ring in case of danger. The door is left open and the rest of the men camp out in a room in view of the stairs (to be available in case of need). Above, there are creaky floorboards that will reveal if anyone in the other bedrooms approaches the haunted room.

Willing, Swayne, and Bradford Alcott have just settled down to a game of cards when the bell rings erratically. When the men reach the room at the top of the stairs, they find Crowe dead. There's no obvious sign of violence and they neither saw nor heard anyone approach the room. The marks in the dusty floor are just as they left them when the three men left Crowe to his fate and the untouched snow surrounding the house show that no one came in from the outside. The local police and Dr. Willing have a seemingly impossible crime on their hands and the first order of business is to discover how an apparently healthy man met his death.

I am in two minds about McCloy's story. On the one hand, this is (in great part) an atmospheric mystery with elements of suspense and horror. The story of previous deaths and the scene in the dining room are very affecting. The locked room mystery (with the unusual twist of the door being wide open...) is quite well done with a solution that is excellent in its execution and its simplicity. But...the teenagers are a bit much. The opening scene where they refer to the adults as "They" and "Them"--always in capitals is very annoying and Vanya's references to Lucinda as "Worm" are pretty dire as well. I also find it bizarre that nearly the whole group--both adults and teens--talk like one of Basil Willing's psychology textbooks. Examining people's reactions with observations fitting in the case of Dr. Willing, but unlikely in the case of ordinary adults at a house party. If the general conversation and reactions of the majority of those in the house had been anything like normal throughout, then this would have been a very fine story indeed. ★★★ and 1/2.

This book has also been examined by what seems like everyone but me in the mystery blogging world: John at Pretty Sinister Books, Brad at Ah Sweet Mystery Blog, Dead Yesterday, TomCat at Beneath the Stains of Time, Dan at The Reader Is Warned, The Green Capsule,  Curtis at The Passing Tramp, Les at Classic Mysteries, and the Puzzle Doctor at In Search of the Classic Mystery Novel. If you have also reviewed the book and would like me to link it up, just let me know.

First line: She was careful to avoid the one stair that creaked.