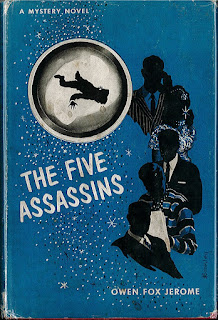 Laurence Tourney is Metromount Studios' biggest star. He's also the one with the biggest ego. He's just been handed a plum role and he's certain the film will prove to be his greatest triumph. Dare he expect an Oscar? Of course, he does. But--he doesn't want to share all that glory with his beautiful, equally talented wife Carlotta Clay (despite the fact that the leading lady role is perfect for her). Besides, he gets enjoyment out of being cruel to her in subtle ways and forcing her to give up an outstanding role would suit him down to the ground. He's none too pleased when she refuses to turn the role down when it's offered to her. And he increases his mental torment campaign against her.

Then, Carlotta's maid dies from a cyanide-laced capsule and rumors start that Tourney or Carlotta was the target. Roy Mallard, head of Metromount, calls in his friend Philip MacCray, well-known detective--formerly of the Chicago Police, to investigate on behalf of the studio. MacCray arrives just in time to witness the filming of the final scene of the movie. A war scene that calls for Tourney's character to die dramatically from a sniper's bullet. Observers of the scene believe it to be the most life-like death scene they've ever seen. There's a good reason for that--Tourney is really dead--apparently from a real bullet.

When MacCray begins to investigate in earnest, he finds that there will be few mourners at Tourney's funeral. Nearly everyone on set had good cause to hate the temperamental star and just about anyone could have fired that rifle. Motives are thick on the ground--from blackmail to revenge to those who would kill to set Carlotta free from her tormentor (including Carlotta; Roland Barry, the producer and the ex-husband who still loves her; and Johnny Wilson, the expert cameraman who worships her from afar). In all, there are five would-be assassins who might be responsible for the movie star's death. And all but one tried and failed. MacCray will not only need to sift through the motives, but he will also need to weed out the murder methods that didn't work to find the one that did.

This was an unexpectedly delightful read from an author I had never heard of before finding this novel in the vintage section of a Half Price Bookstore. Jerome, using his experience as a scriptwriter for Universal Studios, captured the atmosphere of a mega-movie studio with realism, humor, and interest. There is a certain typecasting involved: the temperamental, egotistical star performer; the image-conscious studio bigwig; the producer involved in a love triangle; etc. But one doesn't get the sense that these are cardboard characters. Each of the primary characters--victim and suspects--are brought to life more vividly than any cardboard creation.

The layers of would-be killers--most failing either because someone else beat them to the draw or because of unforeseen circumstances--would bring an almost over-the-top humor to the story if we weren't immediately aware of the despicable behavior of the victim which prompted the murderous attempts. It's a very telling commentary on the character of Laurence Tourney that so many people felt like killing him...and actually attempted to do so. It was interesting to watch MacCray work his way through all the different murder methods to get to final, fatal one. I worked out how the maid was killed and whose hand was at work there...but knowing that only muddied the water more.

Last line: The lovers didn't even hear the door close behind MacCray as he let himself softly out