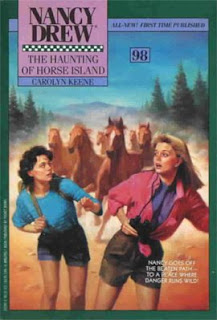 Nancy, Bess, and George are headed to the Steadman Resort at Triple Tree Lake for a fun vacation. Right--anyone who knows the Nancy Drew stories knows that the vacation will be put on hold a bit while Nancy gets to the bottom of another mystery.

The resort is owned by friends of George Fayne's dad, Henry and Ruth Steadman. The place is beautiful with a large lake for swimming, fishing, and boating, a pool, and superior cooking in the lodge's dining hall. And the resort has thrived for years--until now. Rumors are dredging up old stories of the ghost who haunts Horse Island (in the middle of the beautiful lake) and there have been an outbreak of pranks--from a harmless snake found in a tackle box to ransacking of cottages. When vacationers begin to pack up and go home, George suggests that the Steadmans allow Nancy to investigate: "You won't find a better detective anywhere."

The Steadmans agree and Nancy has barely begun to search for clues when the pranks turn more serious--the girls' canoe is spirited away while they investigate the "haunted island" (because Nancy is certain that the renewed haunting rumors occurring just when the pranks started can't be a coincidence) and then a fire is set in their cottage--destroying Nancy's camera and the pictures she took on the island. But Nancy refuses to be driven away and it isn't long before she's gathered enough clues to point out the guilty party.

This is a decent Nancy Drew mystery--the culprit was rather obvious and even the effort to make another character seem suspicious didn't distract me. But it was a fun afternoon's read and I enjoyed visiting with Nancy and friends. ★★★

First line: "Just think," said Bess Marvin from the back seat of the car Nancy Drew was driving.

Last line: "I never want to hear the word ghost again!" Everyone laughed while the Burkle sisters sang on into the summer night.