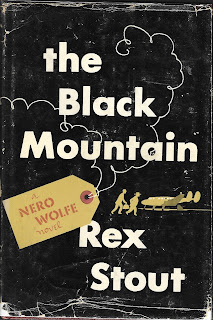 Nero Wolfe's oldest friend, Marko Vukcic is gunned down outside his apartment building and Wolfe immediately plunges into the case. It looks very much like a professional hit job. While Inspector Crames has his team rifling through Vukcic business contacts and love life (Vukcic, unlike Wolfe, enjoyed the ladies), Wolfe and his team are looking for Montenegran connections. He gets word through connections in Europe that "The man you seek is within sight of the mountain." For Wolfe, this means only one mountain: Lovchen--The Black Mountain--from which Montenegro gets its name.

There is another personal connection, Wolfe's adopted daughter, Carla Britten, was in the same political groups as Vukcic--supporting action in Montenegro. She doesn't get along well with her adopted father, but had asked him to look into Vukcic death as well. But she didn't trust him entirely and took herself off to Europe to look into matters. Now she's been killed as well. So Wolfe and Archie head to Europe to hunt down a killer in dangerous terrain. And Archie gets a bit of a shock--in these foreign lands, Wolfe becomes the man of action and his leg-man has to take a back seat.

I've never been a very big fan of the stories that take Wolfe out of his element. When he leaves the brownstone it's a momentous occasion, but rarely an extraordinarily good one. His character isn't made to travel. So, it's no major surprise that I found this novel--which takes Wolfe's traveling to extremes--to be a major disappointment. My notes from the pre-blogging days say I read this and, apparently, enjoyed it way more than I did this time. But I've forgotten everything I enjoyed about it.

The beginning is very good--Wolfe's close friend is shot and killed and he feels personally obligated to track down the murderer. He's going to take on a case with no hope of a fee (and he really doesn't want one since this is a personal matter). But it goes downhill from there--we get a travelogue of Wolfe and Archie going to Europe to take on Communist or Fascist or what-have-you bad guys. We get a stilted story--ostensibly because Archie isn't telling it verbatim as he normally would. You see, Wolfe speaks eight languages and Archie speaks one, so everything we get once we reach Montenegro (Yugoslavia) is translated through Wolfe to Archie. I'm not a big fan of Cold War politics/espionage/secret organization books and they need to be done well to keep me engaged. I just don't think Stout did that sort of thing well. Let's go back to the brownstone and solve some old-fashioned murders. ★

[Full confession--I did not read every word. I skimmed a great deal because I just was not enjoying myself but wanted to count the thing for challenges.]

First line: That was the one and only time Nero Wolfe has ever seen the inside of the morgue.

Last lines: He flattened out and closed his eyes. The ham.

Ah shame it wasn't a good one - but helps to show that not all 'club' books are brilliant! My final post was about four that I didn't think were especially good either.