Luck Be a Lady, Don't Die 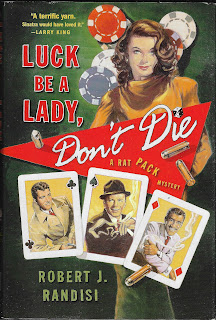 Eddie Gianelli, pit boss for the Sands hotel in Las Vegas, made himself useful to Frank Sinatra six months ago. Sinatra asked him to help track down a guy who was sending threatening letters to Dean Martin. Eddie came through then--at great risk to himself and his position in Vegas. Six months later, it's Dino calling on Eddie to help Frank. It seems the Chairman has lost a babe he was planning to meet on the downlow while in Sin City for the premier of Ocean's 11. Mary Clarke arrived okay. She checked into a hotel and promptly disappeared. Frank wants Eddie to find out what happened and make sure that "sweet girl" is okay. He also gives him Jerry Epstein, a hired gun from New York, for protection and help.

Eddie teams up with Danny Bardini, a local private investigator, and the three of them search the casinos and seedy hotels for a blonde babe who seems to have a habit of leaving dead bodies in her wake--no matter how "sweet" she may be. Things really heat up when Sam Giancana from one of the New York "families" arrives as well as Chicago mobster by the name of Balducci and everyone seems to thin that Eddie knows not only where Mary is, but also a missing hundred grand of mob money. The cops, who don't exactly love him, are also pretty interested in what he knows about the recent uptick in murdered men. He'll be lucky to stay out of jail...if he can stay alive.

This was a decent read--not outstanding, but decent. I like Jerry. Jerry may be a hired gun and hired muscle, but Jerry has a code of loyalty and he's smarter than most people give him credit for. He's assigned to keep Eddie Gianelli safe and that's just what he does--even if it puts him a bit at odds with the man who gave him the assignment. And Eddie's okay--he's a clean, honest Vegas pit man who's surrounded by dirty dealers, dirty cops, mafia bosses, and hit men. But he's not the sharpest knife in the drawer. It certainly takes him a good while to catch on to some of the neon bright clues strewn about and Jerry is ahead of him in many instances. While this was a fun look back at the 1960s and the era of the Rat Pack, I can't say that Randisi has hooked me and made me want to hunt down any more in the series. He name-drops a lot of stars from the era and works Frank, Dino, and Joey Bishop in pretty good, but George Baxt does the mysteries with a celebrity connection much better.  ★★★

First line: The Chairman was dead.

Great review. Even though you said it was decent (not outstanding), I'm going to put this down as a "to-be-read." Maybe try and grab it from the library before snagging it on Kindle. The set-up sounds interesting and worth spending a few hours with it. Thanks for the honest review!

Colin: I hope that you can find it and will enjoy it. The average rating on Goodreads is four stars--so it's entirely possible that you'll think it's even better than I did.