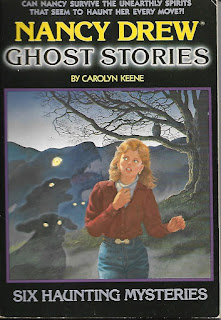 Nancy and her friends, Bess and George, take on mysteries with a ghostly twist in these six short stories. Our heroines get to the bottom of the very live persons behind the ghostly appearances.

It's been a long time since I read these, but I think my feeling about the stories are about the same. Something happened to Nancy once we got past the original 56 stories. She just doesn't have quite the same courage and acumen. In one of these stories she gets locked in an outdoor ice house and she calls out to her friends, "Let me out! It's creepy in here." The stories also have a bit of the feel of a Scooby Doo episode--the mysteries are even more simplistic than the full novels and sometimes the solutions don't make sense. "The Ghost Jogger" jumps about from scene to scene in such a way that it's just confusing--there's no real logic about why the kidnappers behave the way they do. My quibble with "Blackbeard's Skull" is noted below (separated because it's a bit of a spoiler--so be warned). Overall, the stories were pleasant enough and most had a germ of a good plot. It just seems that they're miss a little something. ★★ and 3/4--not quite up to the full three star mark.

"The Campus Ghost": Nancy unravels the mystery of the professor's ghost that haunts the science labs at Clermont College.

"The Ghost Dogs of Whispering Oaks": Nancy helps a friend get to the bottom of the ghostly canines that haunt her family's ancestral farm. Are the dogs upset at their burial place or is there more to the story?

"Blackbeard's Skull": The ghost of Blackbeard is said to haunt and curse those who take his treasure. When the doubloons displayed at a North Carolina ranger station disappear, With the help of the British Mr. Hudson*, Nancy prove it's no curse and discovers where the treasure has been taken.

"The Ghost Jogger": A ghostly figure gives Nancy a message to "find them in the empty barn with the flaming horse on it." Nancy must figure out who "them" are and where the barn is before she can solve the mystery of the ghost jogger."

"The Curse of the Frog": Nancy investigates a fortune teller who may be running a very shady operation. There are threats of a curse--from a weird frog statue. And then she discovers that the frog may have a very different meaning indeed.

"Greenhouse Ghost": Nancy is asked to investigate a cottage with a haunted greenhouse. The owners want to sell the property, but prospective buyers keep getting scared off.

*So...the ending of "Blackbeard's Skull" is weird. We're supposed to believe that Hudson was really a ghost. But he talks and interacts with Nancy and the Coast Guard and the crooks. He gets tied up. He shares a meal with Nancy, Bess, George and the ranger. Pretty bizarre ghostly behavior.