The Case of the Sapphire Brooch 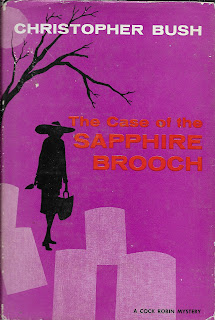 The Case of the Sapphire Brooch (1961) by Christopher Bush

Ludovic Travers is called in by a previous client. In the first case Paul Farrell had asked Travers to trace a missing wife who had run out on him. At that time, the detective had passed the case on to a colleague who remembers that Farrell suddenly called a halt to the investigation after very little investigation had been done. Now Farrell has asked for help again. This time there are mysterious goings-on in his apartment. Farrell, a talented photographer, was lured out of his apartment by a phone call purporting to be from an agent of an American television company wanting Farrell to do some photographic work. He was invited to the man's hotel to discuss details, but when he asked for the room number he was told that there was no one by that name staying at the hotel. He arrived home to find that someone had been searching through his things and decided to aske Travers to check things out.

Travers makes a more detailed search and discovers what looks like blood mixed with water in the sink and pinkish stains on a towel. Did the searcher cut his/herself in their haste to find whatever they were looking for? He also finds a sapphire and diamond brooch--at first he and Farrell take it to be costume jewelry, but Travers has a hunch and takes it to a friendly jeweler to have it valued. It's not worth a fortune, but the stones are real enough. The next day a dead man is found in the vicinity--shot--and something tells Travers that this is the man who searched the apartment. Who is he? Did he find what he was looking for? And did somebody shoot him for it?

Travers joins forces with his old friends Matthews and Jewle of Scotland Yard and finds himself sorting out these questions as well as five women with likely motives, a crippled nightclub operator and his male nurse/bodyguard, four doctors, a band leader, and a couple of French confidence men. There are also impersonations, blackmail, robbery, and suicide to go along with murder. So, there's plenty to keep Travers busy and out of trouble.

This was a solid enough mystery--though I really think it took our detectives much too long to figure out the connection with the dropped sapphire brooch. The plot starts out very nicely with the mysterious search of Farrell's apartment, but drags a bit in the middle while we're sorting out the various women and figuring out who's who and how many names she might have gone by. I enjoyed Travers's interactions with Matthews and Jewle and wish that there had been a bit more of them. It would have helped to push this average mystery into a higher ranking. I thoroughly enjoyed an earlier Travers novel (1946) much more and I'm wondering if all of the later mysteries will lack the pizazz of the earlier stories. ★★★

First line: Neither Norris nor myself has any set hours at the Broad Street Detective Agency.

Last line: That's why I muttered something to Matthews went quietly out of the room.